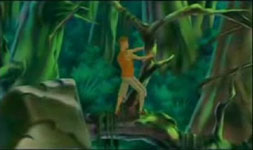 We covered the PC version of Runaway: Dream of the Turtle over half a year ago, but we’re going to bring it up again because it’s heading to North America on the DS in the second quarter of last year. The DS game is pretty much a port with stylus control and a 3D mini-game. This might not be groundbreaking news to North America, but the series is a gigantic in France where the title is developed. I’m personally not too interested in it because I’ve seen it/played it kind of thing. I’m more curious about what Cyanide is going to do next with their new video codec and DS hardware.