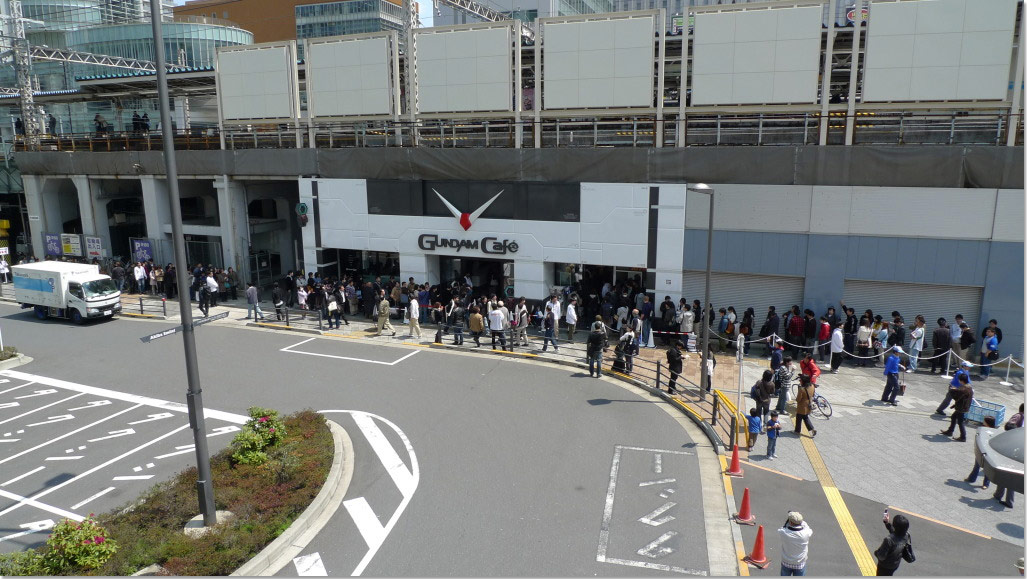 It wasn’t until I arrived in Japan that I received news of a Gundam themed cafe opening in Tokyo’s Akihabara. The grand opening was to be held on April 24th, which had me excited since there was a chance I would be able to attend. My two traveling companions (Tim and Patrick) and I are maybe not the biggest Gundam fans, but we do enjoy the series. We all awoke fairly early the morning of the 24th, but Tim was up first and went on ahead to secure a spot in line. Once I was ready to go I asked if Pat was ready, but he said to go on ahead.

It was a cold morning in Tokyo and I arrived at Akihabara station around 8 AM. Taking the exit towards Electric Town, I immediately spotted the Gundam Cafe & Bar on my right. A small line had already gathered, and after snapping a quick photo, I jumped in to join it. People in line seemed kind of surprised to see a foreigner present. I was definitely the only white guy there in the morning. Unfortunately, Tim was nowhere to be seen, so I sent him a text to find out where he was. He informed me that he was near the front of the line. Awesome! However, as we continued texting each other, it became apparent that Tim was in the wrong line. Once I mentioned the Bandai staff wearing white jackets, he knew that he was in the wrong place. Turns out he was in line to see AKB48.

He dashed back towards the station to get in line, but by that point there were at least a dozen people between us in line. After waiting in the cold for about an hour, the cafe opened and the queue began to move forward very, very slowly. Patrick eventually showed up, but more and more people had gathered and he was a good ways behind Tim in line. Once I had gotten to edge of the cafe wall, Tim had convinced the staff that we were friends and they allowed him to move up to my spot in line. 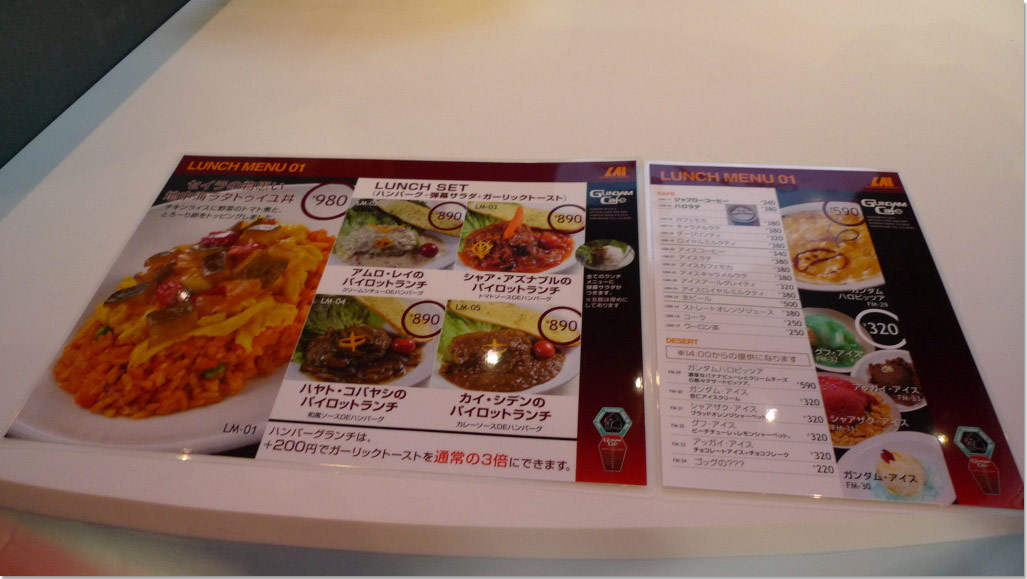 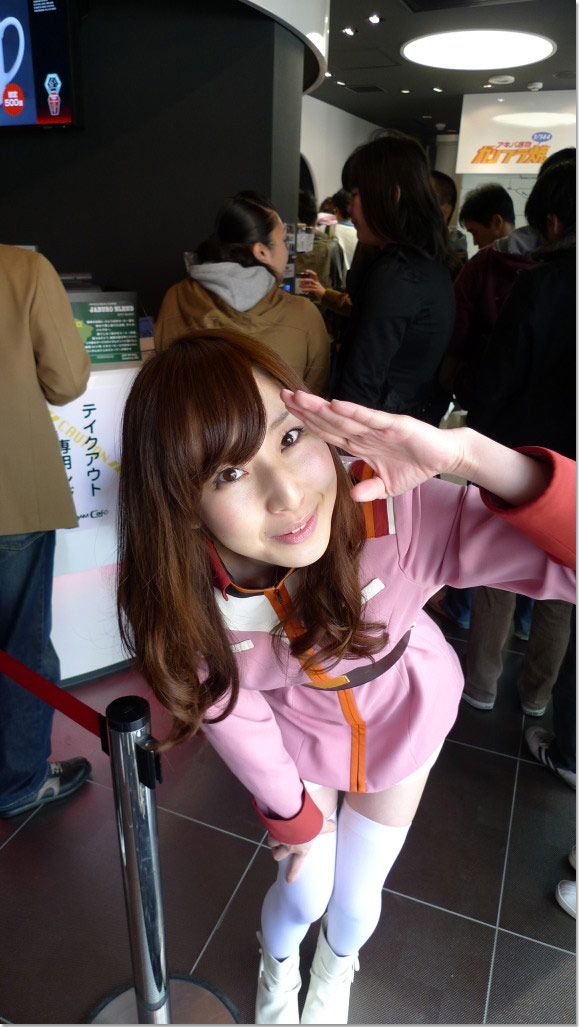 Once we entered the cafe, we were greeted by a very cute girl in an Earth Federation uniform. She also seemed incredibly shocked to see a foreigner, even more so when I asked her in Japanese if it was okay to take a photo. She happily agreed. The cafe itself was pretty awesome. Like most places in Japan, it was divided into a smoking and non-smoking section. Unfortunately, they were only serving beverages in the morning, but the full menu was on display. Tim and I each had a cup of Jaguro blend coffee in a commemorative Gundam Cafe mug. What’s more, for only 1,100 yen you get to keep the mug, too! All kind of Gundam geeks had gathered to enjoy the atmosphere. Display cases housing Gundam figures decorated the non-smoking section, while sketches and signutres from Gundam creators decorated the smoking side. A large LCD television was playing advertisements for new Gundam games, new Gundam DVDs, and displaying information about the cafe’s Jaguro blend.

We were also given some kind of scratch cards with our purchase. There were three areas to scratch, but I believe you can scratch only one. Scratching away reveals a certain number of points. 5 points gives you a discount on the purchase of a beverage, 20 points gives you some kind of card, and 40 points also nets some kind of card. Unfortunately, my Japanese needs some serious improvement, so I’m not entirely sure what the cards do. 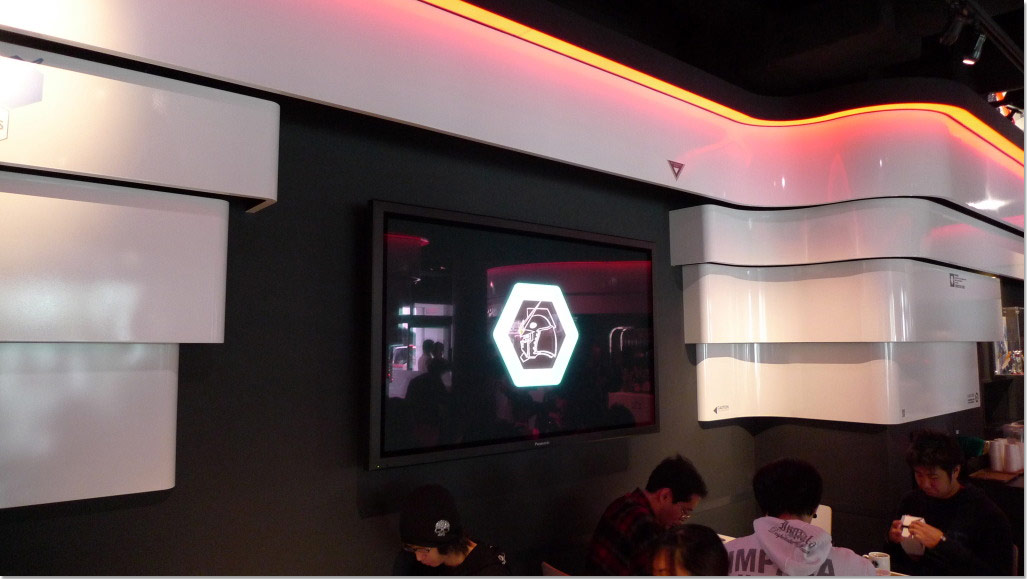 Moving on, one of the coolest parts of the cafe was the restroom. The mirror was set up to make it look as if you were looking out of the eyes of a Gundam. There was a curious blue button on the wall with the words “Press Button”. Curiosity got the best of me and I pressed it. Suddenly, the lights dimmed, the eyes of the Gundam on the mirror lit up, and the sounds of an engine starting up and preparing to launch echoed inside the restroom. It was totally awesome!

After finishing our coffees and snapping some photos, we made our way into the gift shop on the right side of the cafe. Here, Gundam-themed snacks (such as cheese cakes, chocolate treats, and jam filled cookies) could be purchased. There were also coasters, ash trays, and cellphone stickers available. After picking up a couple of souvenirs, we then got in line for Gundam Taiyaki, which was being sold from a small booth on the very right side of the cafe. There were two varieties available: ham and cheese, and red bean paste. They were quite delicious.

I was a little surprised by the lack of cosplayers…I had expected to see more, but there were only a couple of die hard fans who came out all dressed up. If you’re in Japan and are headed to Akihabara’s Electric Town, definitely stop by the cafe and enjoy a cup of the Jaguro blend. You won’t be disappointed. And be sure to check out the entire album of pictures from our cafe visit!

Anton Damiani describes himself to people as an “average guy from Ottawa, Ontario,” and is now the proud owner of an import copy of Soma Bringer. He loves music, videogames, anime and headless bikers. You can read a day-by-day account of his, Tim and Patrick’s 20-day trip to Japan at his personal blog, Tiger-Upppercut.