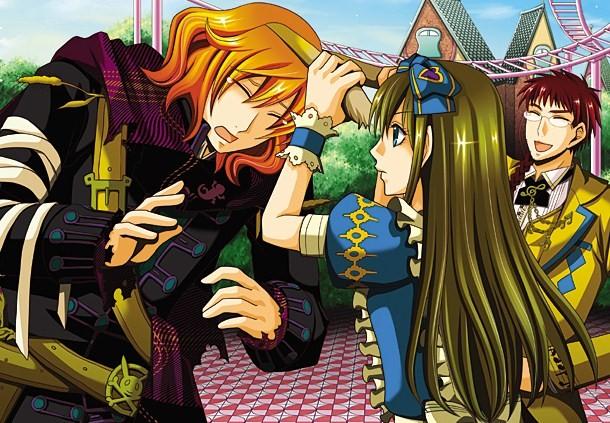 The PSP is becoming a haven for visual novels ports, and Quinrose is jumping on the bandwagon with the forthcoming re-release of Heart no Kuni no Alice. As you can probably guess from the title and screenshots, it’s a otome visual novel loosely based on Lewis Carroll’s Alice’s Adventures in Wonderland. The game originally appeared on the PS2 and PC.

Alice isn’t your typical sweet and dainty lady. Her sister is, but she’s not. As a result, her father pays no attention to her, her sister won the heart of the tutor she fell in love with and Alice has become a pragmatic, occasionally sarcastic and cynical realist. Which was perfectly fine and suited her, until a young man with white rabbit ears named White Peter drags Alice down a rabbit hole to Wonderland. Once Alice wakes up she’s trapped. The Keeper of the Clock makes her leave the tower she’s in, and she has to find someplace to stay in Wonderland.

There are three places Alice can choose to call home while she’s in Wonderland, each populated and run by certain characters from the story. Heart Castle is home to the Queen of Hearts Vivaldi, as well as the Knight of Hearts Ace. The Hat Estate is home to the Blood Dupre (the Mad Hatter) and his subordinates Elliot March (the March Hare) and Tweedle Dee and Tweedle Dam (the Bloody Twins). The final place to live is the Amusement Park run by Mr. GoRound. Other notable characters include White Peter (the White Rabbit), Boris Erei (the Cheshire Cat), Julius Monre (the Keeper of the Clock) and Nightmare.

Like most visual novels and otome games, the goal is to follow a character’s route, earning scenes with the guy of your dream that will boost his feelings for you. However, Heart no Kuni no Alice doesn’t take place in the real world, it takes place in Wonderland. Which means time doesn’t run quite the way it should. Julius decides what time it should be, so you never know what time it will be next and who will be around. (Luckily, you can acquire hourglass items to make it a bit easier and influence what time will come next.) 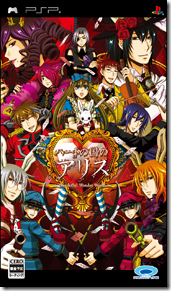 Heart no Kuni no Alice was originally notable for two reasons. First, for the number of CGs it has that you can unlock. There were over 700 in the original versions of the game, and the PSP has many more added into it. Second, it’s quite violent for an otome game. Blood Dupre runs a sort of mafia family, there’s the Queen of Hearts’ beheadings and other sorts of violent fights. The PSP version looks to preserve that aspect, as it’s carrying a Cero C (ages 15+) rating.

In case you’re interested, Heart no Kuni no Alice is going to be out August 20, 2009. If you’ve been looking for a slightly more mature visual novel or otome game, this could be it. Prototype’s page for the game is showing a drama CD and other little bonus items (cards, phone card, towel) being released as Heart no Kuni no Alice promotions.