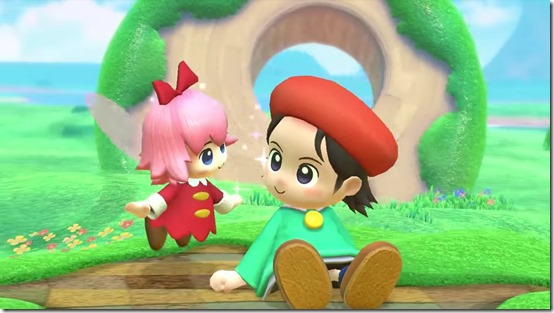 Adeleine & Ribbon are appearing as a two-in-one character as one of the three Dream Friends added in Kirby: Star Allies’ summer update this Friday. Here’s a new trailer demonstrating their moves.

Adeleine first appeared in Kirby’s Dream Land 3 and she appeared alongside Ribbon in Kirby 64: The Crystal Shards. Adeleine is a young human artist with the ability to make pictures she paints come to life, including mid-bosses that she’ll be able to call out as part of her abilities in Kirby: Star Allies. Ribbon will tag along to help out by helping Adeleine fly and also fight enemies.

Adeleine & Ribbon will be available as a Dream Friend in the summer update on July 27, 2018. You can check out trailers for the other Dream Friends with Daroach and Dark Meta Knight.

Kirby: Star Allies is available for the Nintendo Switch. The summer update launches on July 27, 2018.