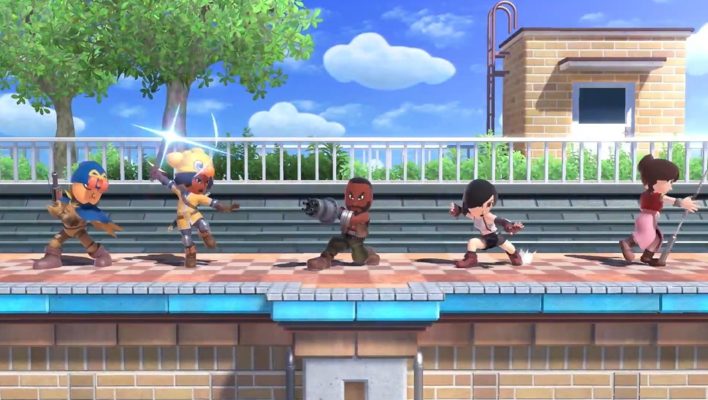 The new Super Smash Bros. Ultimate Mii Fighter costumes were the first reveal during the Sephiroth December 17, 2020 presentation. All of the characters come from RPGs. In addition to a general Final Fantasy Chocobo hat, there are Final Fantasy VII Aerith, Barret, and Tifa costumes. Also, Super Mario Bros. RPG’s  Geno is finally in SSBU as a costume.

Here’s the full list of costumes and which characters they can be applied to.

The new Super Smash Bros. Ultimate costumes will each be $0.75. They’ll appear at the same time Sephiroth does.

The Aerith, Barret, Tifa, and Geno SSBU Mii Fighter costumes will be in good company. The last round in October 2020 added characters like No More Heroes’ Travis Touchdown, Bomberman, and other Minecraft characters. In June 2020, Tekken’s Heihachi, the Splatoon Squid Sisters, and Fallout’s Vault Boy were added.

Super Smash Bros. Ultimate is available for the Nintendo Switch. The Sephiroth DLC and the Final Fantasy VII and Super Mario RPG Mii Fighter costumes will be available on December 22, 2020.