If there’s one thing Level 5’s Aero Porter has taught me, it’s a new appreciation for the cargo-loading workers at airports. Granted I’m sure this isn’t how the task is actually done (if it were, there’d be a ton more mix-ups and unhappy customers!), but I can’t help but feel a strange kinship with them after this hectic game. 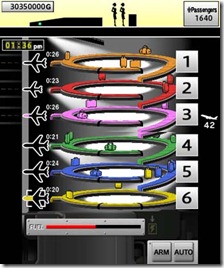 The premise is simple. You’re an employee at a new airport, and you control the cargo tracks to make sure the color coded bags are loaded onto their corresponding planes. The tracks let bags drop down onto a lower track and can pick bags up from a lower track with the simple press of an R and L button (respectively), and when all the bags are loaded, the plane takes off and another takes its place.

It’s a good thing the controls are simple. There are a few other additional buttons but they’re hardly necessary, which is a good thing because the game quickly picks up after your airport slowly but surely expands and more and more planes and passengers visit come through.

Explaining the chaos that takes place is difficult since the premise sounds simple, but when the number of tracks you control increases from two to five to seven, you start appreciating the earlier stages of the game where things were so simple. All the tracks you control with the L and R button move at the same time, so you actually have to be careful with the luggage from all the tracks simultaneously. Sometimes bags will drop simultaneously and there’s no way to separate pick one up while keeping the other one on its original track. Other times you might accidentally drop a bag from a track while you were focusing on another one. 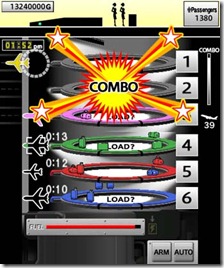 Luckily, luggage can be loaded piecemeal, and the plane won’t take off until either all the luggage are onboard or until the departure time has been reached, so you can actually cull down on the number of bags you have to keep track of. Planes will take off at the end of their departure time (there’s a countdown at the side of the screen) regardless of whether there’s the right bags in them.

However, if no bags are loaded at all, the flight will be cancelled completely and you’ll be penalized. On the other hand, if you load multiple planes in a certain span of time, you can get combos and extra rewards.

The stages in the game aren’t exactly clear-cut. You (as the airport worker) work a shift, and during that one shift you try to fulfil some criteria or another. The criteria doesn’t change until you fulfil it, even if the shift runs out, but once your shift is over, you’ll have to start working on the requirements from scratch again. The accomplishments money-wise and passenger-wise are still counted despite the “failed” attempt, but no new criteria will appear and the airport won’t be expanded.

After a couple stages, Aero Porter mixes things up a little. First, you’ll have to keep an eye on the fuel used to run the tracks. If it runs too low, you’ll have to drop a fuel cartridge to a spot below the last track via R button… which means that if you’re not careful, bags can be dropped down there, too, and be lost forever. You can also conserve fuel by turning lights off using the control pad. In addition, you’ll be allowed to control the speed of the tracks, although moving the track faster will use up more fuel.

Also, different items may be dropped onto the track. One such is a Hazmat barrel, which needs to be loaded off a truck of its own as quickly as possible. Another is VIP bags, which need to be loaded onto the correct plane first on its own (put it on a track of its own, and then put all other bags going to this plane on the track). If you don’t do this, you’ll be penalized. There’s also another form of the VIP bags that are color-coded to the wrong flights for security protection. Instead of looking at the bag colors, you’ll have to keep an eye on the tag on the bag which is colored to match the correct flight. 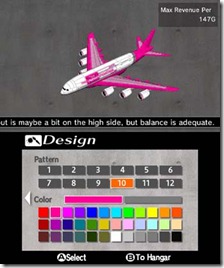 All in all, with so many things to keep track of, Aero Porter is by no means easy (unless you’re good at this kind of multitasking). The design is great, though, and it was a great decision to keep controls so easy.

After everything’s said and done and your shift’s over, the game also gives you feedback very nicely. Some of the tips may be more helpful than others, but it’s nice to have such positive reinforcement. There are also helpful tips that appear in the game as new features are unlocked and as VIP bags are dropped down.

I’m actually really glad that Aero Porter tries to make things easy for the players because, frankly, I haven’t been this stressed while playing a game in a long time. There was always a feeling of underlying panic as I watched bag after bag (3-5 per plane) drop onto the top track, and then accidentally ended up moving just the bags I wanted to keep onto the track below. Perhaps I just need to find the right strategy to handle this… Or maybe a sorting algorithm…

2. Sometimes the tips popping may mess up your sorting. Be careful with button mashing. Also, you can’t unload the top track last minute while bags are still dropping down from the top of the screen, unfortunately, so the top track needs special attention and handling.