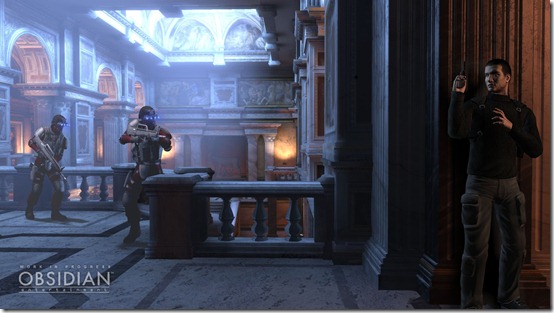 What do you get when you mix Mass Effect with a bad James Bond film? Alpha Protocol.

Obsidian Entertainment is calling Alpha Protocol an espionage RPG, but it’s more of a third person shooter. The “RPG” part refers to a gigantic dialogue tree that feels like a homage to the LIPS system from Sakura Wars. As cocky secret agent Michael Thorton you have seconds to pick a tone during conversations either aggressive, professional or perverted. The game calls the last one “suave”, but when you pick it Thorton usually hits on the person he’s talking too. Most RPGs with conversation choices have some kind of morality system at their core. Alpha Protocol does not. You can be businesslike in one mission and a trigger happy spy in the next. I played around with Thorton’s personality quite a bit and being inconsistent can help him get what he wants – cash by extorting a criminal in one scene and a clean record in the eyes of his government employers in the next. Choices are set up in morally gray situations so you never feel too bad about any decision. 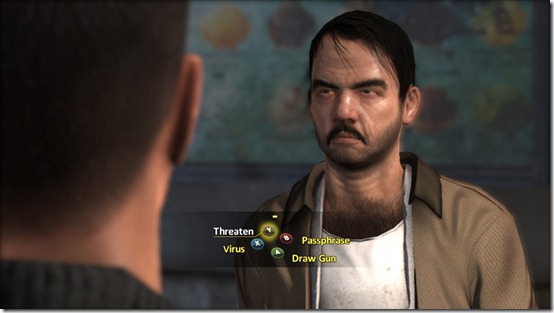 When I saw a preview of Alpha Protocol one of the developers from Sega emphasized the concept of “many middles”. In one of the early choices you can force an arms dealer to talk, giving Thorton information, or kill him. Mike’s higher ups won’t like the latter choice, but you’ll cut off weapons for a terrorist group. Most of the game’s choices are more subtle. You level up reputation or destroy relationships with each emotional stance. The game keeps track of everything with +1 and – 1 stats shown to players and Alpha Protocol tangents from there. While I liked Obsidian’s touch of over the top character design (quirkiness separates the cast of Alpha Protocol from say 24), no matter how the story twisted I didn’t feel for the characters. Perhaps, Obsidian made Alpha Protocol too flexible and ended up with hollow shells waiting for you to input a command. The way the plot can change is still interesting and since Alpha Protocol is a short game it’s designed to be played again and again…

… if the action part was more entertaining.

The visual novel-like section is only half of Alpha Protocol. Gunning down bad guys is the rest of the game. Each mission starts in a safe house, a high tech base, where you gear up. Mike has a variety of weapons and spy tools to play with including a handgun, grenades, shotgun, assault rifle, and an EMP pulse device. The best weapon may surprise you. It’s Mike’s fists. Alpha Protocol, for reasons I can’t understand, uses an accuracy stat to “calculate” whether a shot hits or not. You can have an opponent lined up in your crosshairs and miss. Maybe Obsidian thought this was a balance to Mike’s superhuman time slowing powers or brief moments of invincibility (both are special skills), but forcing players to miss makes Alpha Protocol’s missions frustrating. 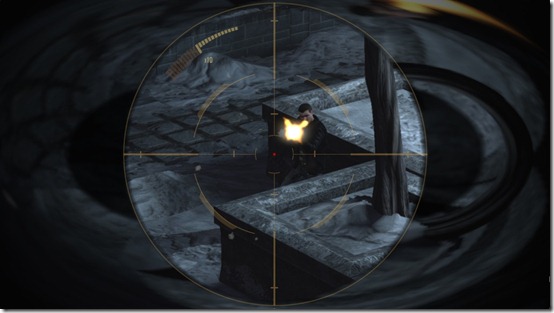 Even though enemies carry guns, fists still work because they act erratically. Computer controlled characters may stand there waiting for you to run up to them or start walking in circles when they see you. Think of Duck Hunt with spies and no light gun. Since the AI lacks the “I” there’s no reason to be stealthy. During gunfights you can take cover, but sometimes bullets magically pass through objects so you can still get hit. Another reason why sprinting and punching is just as effective. While spies everywhere will frown on this, rushing in with guns blazing or better put feet flying is usually the best strategy.

Obsidian also squeezed in some hacking mini-games during missions too. Players need to pick locks by gently holding the shoulder buttons. To turn off alarms, Mike has to scan through a sea of code (read: flickering numbers in letters) and match digits by dragging them with the analog sticks. These sound neat, but the hacking parts don’t change. You’ll do the same follow the maze to unlock the door bit over and over.

If you really want to experience the flexible scenario you have to go through Alpha Protocol more than once. But, Alpha Protocol, as it is, is so rough in terms of it’s broken shooting (I played it as a brawler with shooting mini-games) and character development (Thorton is best when he’s an outright jerk – that’s not good) it’s hard to get through a single run.