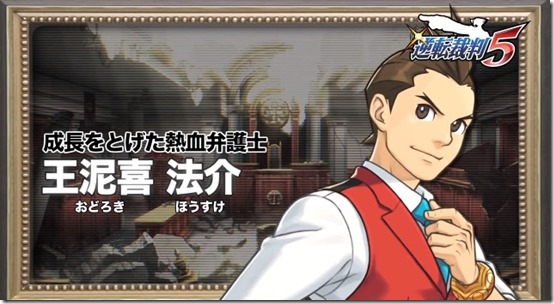 After covering Phoenix Wright and Athena Cykes, the third part of Capcom’s ongoing Ace Attorney: Dual Destinies character introduction video series is all about Apollo Justice, where scenario director Takeshi Yamazaki talks about the return of the young defense attorney.

Apollo, who was the main protagonist of the series’ fourth and previous installment, Apollo Justice: Ace Attorney, will be returning as a playable character in Ace Attorney: Dual Destinies, where he’ll be going up against new prosecutors and unraveling a new chapter of his life as a young lawyer.

Ace Attorney: Dual Destinies takes place about a year after the events of Apollo Justice: Ace Attorney, in which time Yamazaki believes he has grown into a much more reliable man. This time around, there will be a new lawyer in Athena Cykes as part of the Wright Anything Agency, who will be considered Apollo’s junior, so he’ll be showing a more mature part of himself, as her senior at the agency.

At the start of the game, Apollo will appear wearing a mysterious jacket and covered in bandages, and according to Yamazaki, he won’t exactly be his usual self. Not much more can be said about the reasons behind his appearance, but Yamazaki shares that there is definitely some sort of trauma behind it, which will unravel along with his story in Ace Attorney: Dual Destinies.

Apollo who was known for being the young, fresh and loud lawyer, will be quite different in the fifth installment of the series, where we’ll see several different sides of his character.