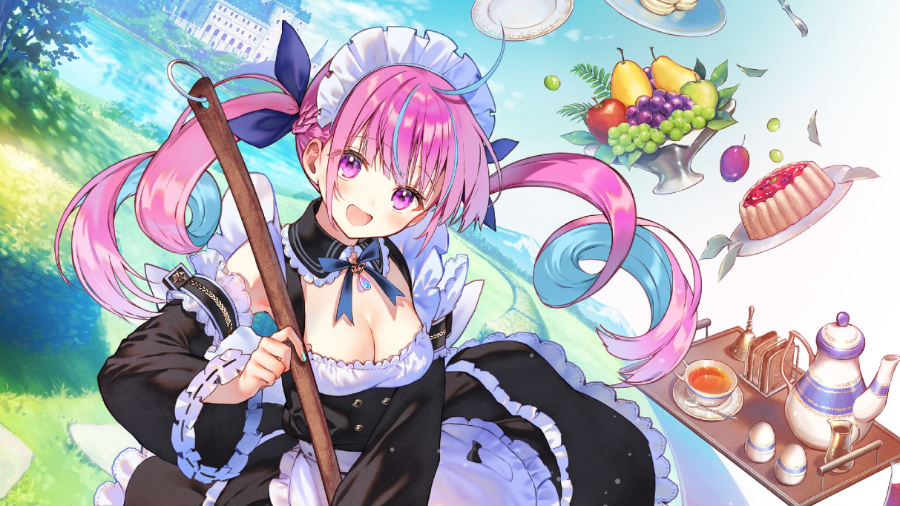 Entergram and Hololive will release a new dating visual novel Aquarium starring VTuber Minato Aqua. The VN will release for the Nintendo Switch and PlayStation 4 on October 27, 2022. Pre-orders will be available starting June 30, 2022. It’s unclear whether the game will receive an English release. [Thanks, Game Watch!]

The teaser site for Aquarium reveals the game’s key art and further details. Second generation Hololive VTuber Minato Aqua is both producing and starring in the game. Furthermore, the description indicates that it will be a “romantic adventure game.” However, there are no gameplay details as of yet.

The key art features Minato Aqua in a maid outfit holding a mop. It appears that she is floating in the air alongside various fruits, a tray with a cup of tea, books, and other snacks. To her right is her grey stuffed cat holding a bell. It appears to be a European setting, with possible fantasy elements.

Minato Aqua announced Aquarium‘s development earlier this year during a solo concert performance. The game’s developer, Entergram, created KonoSuba: Labyrinth Of Hope And The Gathering Adventurers as well as other visual novels.

Hololive and Entergram will release Aquarium for the Nintendo Switch and PlayStation 4 on October 27, 2022. Pre-orders will open on June 30, 2022. The PlayStation 4 version of the game will be a digital download. There is no confirmed price or English release.