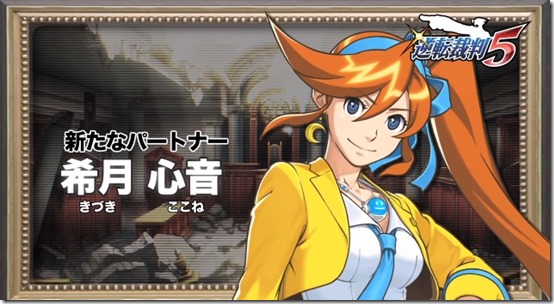 Capcom have started a series of Ace Attorney: Dual Destinies character introduction videos in anticipation of the 3DS title coming out next week in Japan. The first video was all about the series protagonist, Phoenix Wright, and this time, the spotlight is on the new heroine, Athena Cykes.

Ace Attorney: Dual Destinies scenario director Takeshi Yamazaki describes her as the main character’s new partner, who happens to be a new layer herself. When compared to the past heroines of the series, Athena will be contributing much more and will be a huge part of the game, helping you out in investigations and solving cases.

Athena will be using her Mood Matrix device, which is seen around her neck as a necklace, to pick up subtle emotional clues in the voices of other people during testimonies as a method of cross-examinations. This feature will be new to the Ace Attorney series, and one of the reasons that will be making Athena the most active heroine thus far.

According to Yamazaki, they’ve set Athena to be a competitive and sporty girl. She’s very energetic and active, and will be participating in many events. The scenario director reiterates that she will have a huge role in Ace Attorney: Dual Destinies, and he hopes fans will enjoy seeing her story unfold in the game.

You can check out the latest English trailer featuring Athena and Apollo investigating a murder, here.