Lucas Pope’s award-winning “dystopian document thriller” Papers, Please is out now on iPad at the discounted price (25 percent off) of $5.99, down from its full price of $7.99.

In it, you play as the inspector at the Grestin border checkpoint of the fictional communist state of Arstotzka. This involves checking peoples entry tickets, passports, and other documents and looking for any discrepancies in order to decide if they can enter or not.

You’re paid by commission, and so the more people you rightfully let into the state, the more you get paid. The money you earn is then divided between feeding your family, keeping them warm, and buying them medicine if they need it. 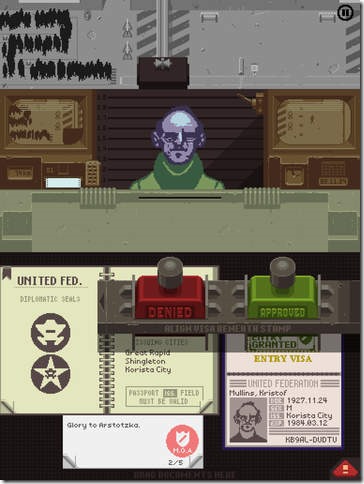 If you cannot afford to support your family then their health degenerates. This adds further pressure on your need to be quick and comprehensive when checking the documents at your job. It doesn’t help that further inspections need to be carried out either, such as fingerprint scans, and full-body searches (although Apple rejected the nudity in this part of the game).

Meanwhile, tensions rise between Arstotzka and the neighboring state of Kolechia, between which a six-year war just ended. So you have to be particularly vigilant as smugglers, terrorists, and spies are attempting to get past you.

Papers, Please was originally released for PC in 2013 and won multiple awards, including those from The New Yorker, BAFTA, and the IGF. More information on the game can be found on its website.