Crossover fighting games are all the rage so its no surprise that Eighting jumped on a chance to make a fighting game with Dragonball Z, One Piece and Naruto. Eighting has had a long history creating the Naruto: Geiktou Ninja Taisen (aka Clash of Ninja) series on the Gamecube and the Zatch Bell games. Instead of going for a traditional arena combat game like their other titles, Battle Stadium D.O.N. is more comparable to Super Smash Brothers. If you add up Eighting’s talent, the popular license and a gameplay style that many people still love Battle Stadium D.O.N. should be a sure fire hit right? 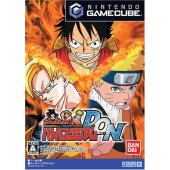 Then again maybe not. Battle Stadium D.O.N. doesn’t just borrow gameplay from Super Smash Brothers, it is Super Smash Brothers with anime characters and minor changes. Players start off battles by picking their favorite anime avatar and then you’re placed into an arena with up to three other characters for a battle royale. You can do a basic string of attacks with the B button, but to do all of the signature moves like the Kamehameha and barrage of lions you have to press the Y button. Using special attacks like Zoro’s Tatsumaki expends a little bit of your battle gauge, which limits how often players can use special attacks. Finally pressing the X button does a character’s ultimate move like Goku’s Spirit Bomb or Naruto’s Rasengan. Using a super move requires players to stock up ¾ of the bar before they can execute a special attack. Where the game deviates from other fighting games is with its tug of war life system. Every time a character gets hit they release red life orbs. The attacking player automatically gains some of these orbs by attacking. If a player runs out of orbs they get to keep playing until one other combatant snags orbs from the remaining fighters. When a fighter manages to obtain the majority of orbs on the battlefield they begin to glow and enter “burst” mode. In burst mode the character deals more powerful attacks and can make an easy victory for a player. However, there is sort of a balance issue with burst mode. Since a character can only be in burst mode when they have nearly all of the orbs, it leaves less room for a balanced fight or comeback.

Battle Stadium D.O.N. has an item system to make gameplay more random than just basic combat. Dropped in levels are items like Zabuza’s sword, Goku’s pole and bombs to attack with. There are also stat boosting items like speed up and big which makes your character grow to twice their size. Some battlefields are basic arenas like Naruto’s ramen shop and Luffy’s pirate ship. Others are more interactive such as the Forest of Death battlegrounds. In the Forest of Death players have to fight against combatants while moving forward on the side scrolling map. Placed on screen are traps like a flying log, spiked floors and occasionally a snake that attacks from the left side of the screen. Another stage s has players climb a giant beanstalk in the sky while fighting and lastly there is a Dragonball Z stage set on the Planet Namek while the planet is under destruction.

So just who is in Battle Stadium D.O.N.? When you begin the game players can pick from Naruto, Sasuke, Kakashi, Sakura, Goku, Gohan, Vegeta, Piccolo, Luffy, Zoro, Chopper and Sanji. There are more characters to unlock like Gaara, Nami, and Cell which you can get from playing the single player adventure mode. In one player battle mode missions will occasionally come up where you have to win under a certain time limit, get a couple of ring outs or win with a full battle gauge. If you win the fight and the mission goal you will gain coins to use in a slot machine after the final fight with Cell. If you get match up three of the pirate icons the slot machine will go into a special mode where you can unlock a character by selecting three of the blank Polaroid pictures. The unlocking process is rather tedious compared to other fighting games. Along the way you can earn tickets to alter gameplay in Hachi Machi battle.

Battle Stadium D.O.N. has decent graphics, easy to pick up gameplay and if you have a Gamecube four player simultaneous combat. It also has all of the standard modes like the single player battle system, survival mode and practice. However, if you’re not a huge anime/manga fan you probably won’t enjoy Battle Stadium D.O.N. that much. Instead of trying to offer a different experience, Battle Stadium D.O.N. sticks too much to the basics, which makes it come off as derivative instead of distinguished.

Jumping into combat is cake and the controls are easy to pick up. One of the major problems for importers is learning the game’s single player “goals” where you can rack up coins for the slot machine. The goals are random and are in Japanese, which can make earning coins a little more difficult.

With new consoles on the horizon and licensing issues between a few companies it makes it unlikely that Battle Stadium D.O.N. will make it to North America.

– Cons: A lack of depth to the single player mode and unlocking characters is more painful an experience than it should be.

Overall: Battle Stadium D.O.N. knows its target audience well, young gamers who love the three Shounen Jump series and Smash Brothers. Even though it delivers exactly what it promises something in the anime mash up fighting game is missing. Perhaps it is the oversimplified fighting system or it relies too much on the stars to pull the weight of the game. In either case gamers who aren’t heavily into Naruto, One Piece and Dragonball won’t get the most out of the title.