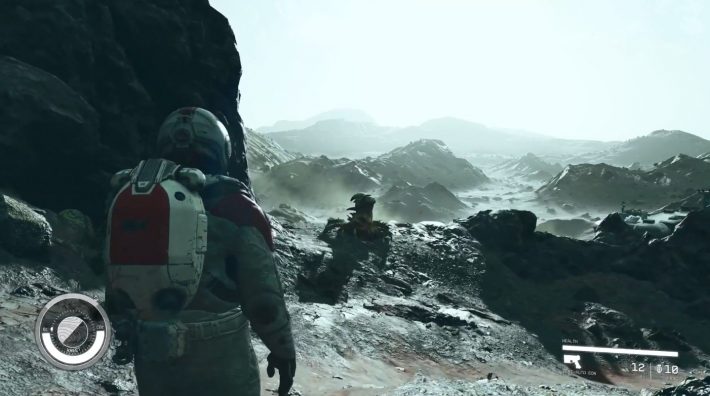 Starfield may not be coming out in 2022, but Bethesda and Microsoft had more to share about the new original open-world game at the 2022 Xbox Showcase event. Bethesda head Todd Howard appeared to present more details on the long-in-development RPG, as well as reveal the first actual gameplay footage.

Howard showed off footage from early gameplay in the Starfield campaign, when players arrive on a mysterious moon. They disembark from their ship, alongside a human-sized robot companion. The player explores the area in both first- and third-person perspectives, and encounters a facility in use by the “Crimson Fleet Pirates.” Armed with a gun, they storm the compound, killing the pirates and taking their loot. During the firefight, another spaceship arrives, which the player jumps to using a jetpack.

The Starfield gameplay footage then skips to a more peaceful section, after the player visits the Constellation faction at their capital on New Atlantis. They speak with a new character in the telltale zoomed-in conversational view used by Bethesda’s RPGs, and are assigned a mission to determine the purpose of some mysterious artifacts. The Starfield trailer moved into a gameplay montage, featuring conversations and factions from the game.

Check out the full trailer below.

Players will be able to create their character, and can determine their skills and traits. The skill system combines elements from other Bethesda RPGs like Fallout 3 & 4 and The Elder Scrolls. They’ll be able to craft weapons, build out a home base in Starfield homesteading gameplay, hire NPCs, and eventually construct and customize their own personal spaceship. These ships can be flown directly as well, with an in-cockpit view reminiscent of space sims. There is also space combat, with the player-flown ship taking on some pirates.

Howard closed out the Starfield gameplay presentation with a boast about the scale of the game. It’ll have over 1,000 planets across hundreds of star systems. Planets that can be landed on, like New Atlantis, can be explored in full, with players able to fly and land anywhere on the surface. He didn’t elaborate on whether the planets are bespoke creations or procedurally generated like No Man’s Sky.

Starfield is in development and scheduled for release in 2023 for Xbox Series consoles and PC. It will arrive on Xbox Game Pass upon release.