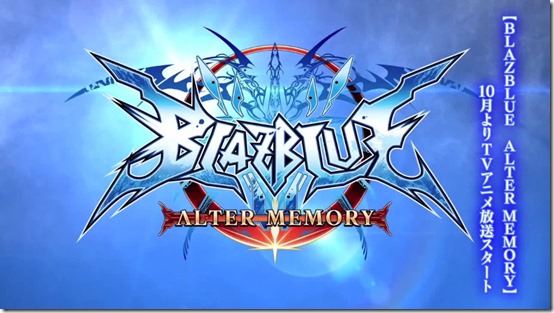 While Arc System Works have been all about Guilty Gear Xrd Sign, leading up to the game’s location test location test, they haven’t forgotten about BlazBlue fans that are looking forward to the anime adaptation announced earlier this summer. The official website for the upcoming anime shares a look at the first trailer.

BlazBlue Alter Memory will be based on the story of BlazBlue: Calamity Trigger, where we’ll see the drama unfold between Ragna and Jin Kisaragi, along with Hazama and other characters from the BlazBlue series.

As previously reported, Hideki Tachibana (Higurashi no Naku Koro ni Kira) will be directing the anime, in collaboration with Seiji Mizushima, who is known for directing Fullmetal Alchemist and Mobile Suit Gundam 00.

BlazBlue: Alter Memory will begin airing in October, the same month BlazBlue: Chrono Phantasma will be released on the 24th.