As you would expect, the Black Mage garb increases Lightning’s prowess with offensive magic. It also gives her a new ability that blends wind and thunder elements called Thundara + Aerora. Another change is the Area Sweep move will hit multiple enemies if they are around Lightning. I guess that makes it useful if Lightning is surrounded.

Lightning can block to reduce damage from enemies and with a well timed strike she can cancel an enemy’s attack. This maneuver is called a counter blow, which you can execute by doing a physical attack right before an enemy hits you. Lightning can also injure monsters by chopping off their tails or horns. This weakens monsters and changes the items you win after battle. 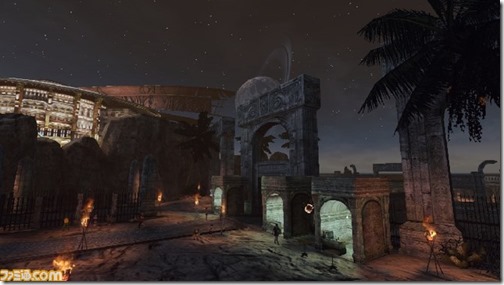 Love fighting? Yusnaan has a colosseum called the Arena Slaughterhouse where you can satiate Lightning’s bloodlust. But, don’t spend too long there because Lightning Returns: Final Fantasy XIII has a timer that counts down to the world’s imminent destruction.