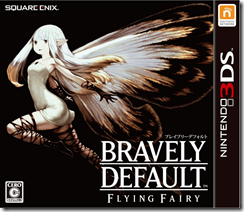 When Nintendo announced they were the publisher of Bravely Default: Flying Fairy the game was slated for late 2013 in Europe and 2014 in North America.

The 3DS role playing game slipped to 2014 for Europe, according to Nintendo’s latest financial report. Professor Layton and the Azran Legacy will still be released in "later 2013" in PAL regions and 2014 in North America.