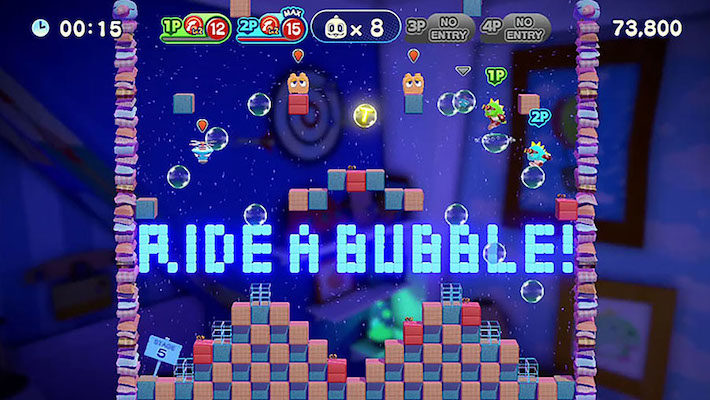 Bubble Bobble released in arcades back in 1986 and its novel, cooperative gameplay and adorable dinosaur characters named Bub and Bob were popular enough to justify a prompt release on computers and home consoles. The series went on, producing innovative games like the incredible spin-off Bust-A-Move, often showing notable signs of growth and creativity. Its latest release, Bubble Bobble 4 Friends: The Baron is Back for the PlayStation 4 is a re-release of Bubble Bobble 4 Friends, which released on the Nintendo Switch on March 31, 2020. It adds news stages and content to the original on release. People who already own the Nintendo Switch version will also receive this additional content as part of a free download.

One of the big selling point of Bubble Bobble 4 Friends: The Baron is Back, as the name might imply, is that four friends can play together across all of its modes, although this can only be done through local gameplay. Theoretically, you can play the game with non-friends, or even enemies, which is preferable to simply playing the game by yourself; it simply isn’t designed to be played alone. It isn’t consistently designed for four players either, though. In fact, playing with just two players rather than four seems to be the optimal experience on some stages, assuming you’re only looking to clear the game. That said, boss fights appear at the end of every ten-stage set, and these are typically more fun with more players. Chasing a high score is also better with four players. The only consistent rule regarding player count is that single-player isn’t fun. This is true, even in the extra levels that have been added for The Baron is Back.

In Bubble Bobble 4 Friends, players traverse a series of screen-sized stages filled with platforming and enemies. Each stage presents a different challenge and clearing them is as straightforward as dispatching all of the on-screen enemies. To do so, players must use bubbles to capture enemies, so they can be safely dispatched without taking damage as contact with a non-bubbled enemy leads to death in single-player. In multiplayer, taking damage causes the character to float about in a bubble, awaiting rescue. If rescue doesn’t come in a timely manner, then the character dies and the shared stock of lives depletes by one. While this makes the game easier, technically, the sudden appearance of a new goal in the form of frantically rushing to save a friend, elevates the excitement a bit.

Some of the fun in Bubble Bobble 4 Friends arises from the intrinsic chaos of having multiple players present and the need to coordinate efforts despite this. Multiple players means multiple approaches are available that would otherwise be lacking. Attacking an enemy in a bubble can cause it to go careening about the level, crashing into things. And multiple enemies can be captured and dispatched simultaneously. This means that there are opportunities for combos that can improve the players’ shared score. Most stages are designed with multiplayer in mind, too. Different elevations present different opportunities to use rising bubbles to aid one another in the platforming elements. In single player, the game can even feel slow such as in instances where an enemy in a jet stream is dragged so far away from you, that you’ll likely wish that someone else had been in place to dispatch it from its eventual location. Positioning is of surprising importance if you’re trying to clear a stage in an optimal way. 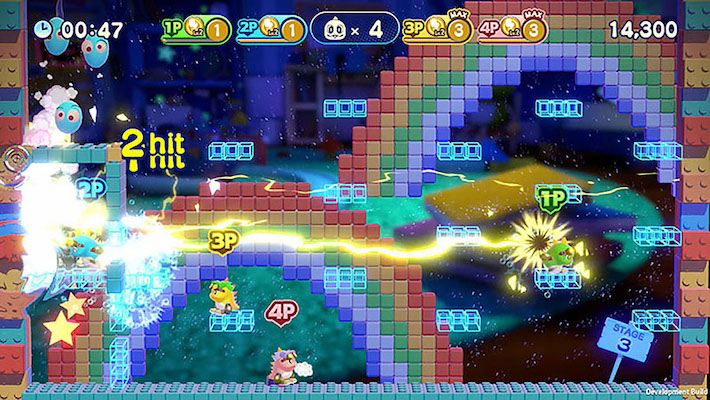 This is part of what makes the game fun, but also what makes single player a bit of a drag. The game isn’t merely about improving your score, and the overall goal of clearing stages can be a chill way to pass some time, although it can become repetitive and dull if you try to play through a lot of the game at once. Also repetitive are most of the game’s aggressively chipper, pulsing, melody-driven songs, although some of these later songs that aren’t just updated versions of the original Bubble Bobble soundtrack can be a bit more pleasing to the ear.

To its credit, Bubble Bobble 4 Friends: The Baron is Back is one of those games that lets you engage with it on your own terms. For some players, engaging with the game as a perfectionist, or taking interest in the competitive nature of scoreboards, will vastly improve the experience. There is something to appreciate about how something as simple and classic as a scoreboard can render a game appealing to challenge-seekers without compromising accessibility. Meanwhile, younger audiences, or parents looking to game with their kids, might find something of value here, too.

It’s frustrating how difficulty is managed. Each of the five worlds feels as though it resets the difficulty at the first stage and increases in difficulty until the boss fight. This would be okay if the game was consistently introducing new concepts that complicate stages or abilities for the players to incorporate into their approach but this is hardly the case. It is possible to acquire items with unique functions but they need to be selected at the beginning of a world. Varying these items between players can be interesting, but their limited use and general unwieldiness means that they don’t have much of an effect on a single-player game.

Bosses are generally simple encounters that feel like a cross between Mega Man bosses and Yoshi’s Island bosses in that they are contained within square rooms and dodging specific moves adds some variety to the fight. The variety is especially welcome, too, because there isn’t much present in the rest of the game aside from the slightly different aesthetics of the worlds. The boss fights are also a nice change of pace from the rest of the game where avoiding damage is generally pretty easy, and there’s no direct way to do damage. Bubbles do damage upon hitting the boss. When enough damage is done, it, like every other enemy, is captured in a bubble. If these bosses were more challenging, they could improve the game in a significant way. As it stands, only the game’s fourth boss presents much of a challenge and it is enjoyable no matter how many players are present. 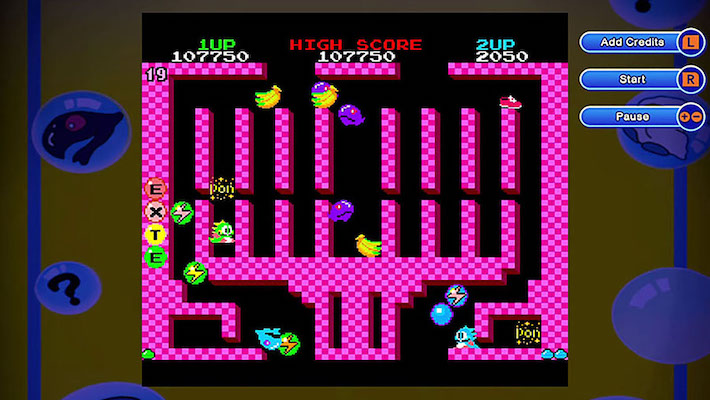 Once the initial five worlds are cleared, a hard mode is unlocked. This mode presents an opportunity to traverse the same stages but with different enemies. It isn’t a huge spike in difficulty, but the inability to become invincible after three game overs might raise the tension for players who found that they needed it in the original versions of the worlds.

I will say that The Baron is Back takes on major step forward from the original release by borrowing from its predecessors. As the subtitle would imply, the Baron is back. In the new content, players will have to deal with the invincible enemy Baron von Blubba. This inclusion leads to a greater appreciation for level design for each of the one hundred stages of new tower-climbing mode as they aren’t merely a slog from enemy to enemy. There’s an urgency that heightens the experience. The fact that players share a stock of lives between them makes survival seem even more important, since the whole team is affected by individual mistakes.

Despite the addition of a slew of new content, Bubble Bobble: The Baron is Back doesn’t do much to alleviate some of its fundamental problems. It may even not be possible to elevate the game to greatness just by building on the established foundation. The steps they’ve taken in this version do, however, give me hope for future iterations should the series continue.

It’s hard to say if Bubble Bobble 4 Friends: The Baron is Back is worth its current $39.99 price tag. There are over 200 levels, and it is possible to revisit the classic arcade games to see how things have changed. But in doing so, it’ll become clear that this iteration doesn’t take any substantial leaps from the original titles. This is something that hasn’t always been true for games in the series.

I can’t wholly condemn the game for its shortcomings, though. There are very few games like Bubble Bobble out there, and this game is a decent and accessible method for fans to revisit the series on modern consoles. It’s also rare to see a game designed with such an emphasis on local cooperative play. Lackluster single-player aside, approaching the game as a teambuilding experience for all-ages, or viewing it as a game with an infinitely high skill-ceiling for score chasers, does boost its overall value in an appreciable way. Unfortunately, this aspect of the game does rely on having local players around while we are in a pandemic. I was able to play with others thanks to the PlayStation 4’s shareplay feature, but that won’t be an option for everybody. Hopefully the game comes down in price a bit by the time quarantine is over. It’s far easier to make the recommendation in that context. Without the added features of The Baron is Back, that wouldn’t be the case.