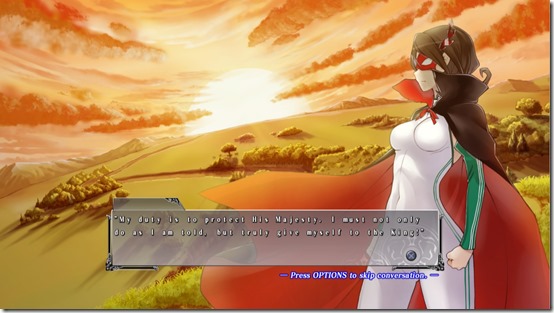 Caladrius Blaze is a shoot’em up that’s received quite a bit of attention due to its characters. Suzuhito Yasuda, of Durarara and Devil Survivor fame, designed the people populating this fantasy world, and the familiar art pulls people in. But, the designs are only the start. The characters themselves are intriguing personalities. Their plight, as they attempt to save a world after a king uses a forbidden spell, becomes more interesting as we see each person’s motivation for fighting, no matter which side they’re on.

Each of the Caladrius Blaze’s heroes has their own elaborate back story and reason for challenging King Graham’s army. These are people who are out to right significant wrongs. Some are more questionable than others. Nightmare of the Lilith is absolutely a chaotic character driven by revenge. But most of the people we’re following are some degree of lawful or good. They want to defend people, like Alex or Maria, fix a mistake, like Kei, and undo the spell ruining the world. They’re interesting, and you’ll want to see how the stories for people like Kei, Layis, Noah, and Sophia in particular play out.

I think Caladrius Blaze’s villains may be even more appealing. Every time you encounter an enemy, there’s a bit of exposition detailing how they’ve happened upon their weapon and the circumstances that led to their facing off against the hero. Some of them are blatantly evil, like Eleanor, forcing people into fights. Others genuinely believe they’re doing what’s right, like Layis or Iris. Then, there are a few who’ve been forced into this position and have no alternative, like Milia or Noah. Rather than black or white, there are shades of grey. 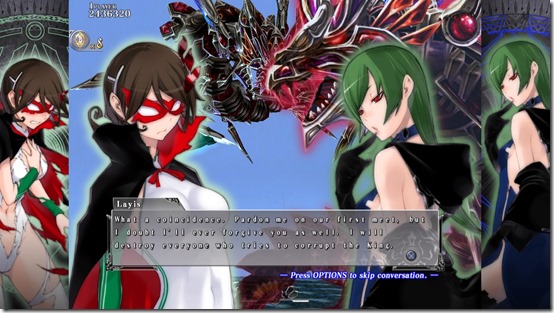 It’s a shame the localization doesn’t do any of these people justice. Caladrius Blaze’s script is poorly translated. Occasional spelling and grammatical errors aside, awkward phrasing takes poignant moments and trivializes them. Instead of sympathizing with characters like Milia and Nina, two women who find themselves forced into weapons by a monarch and his mage, the text takes us out of the moment. An introduction attempting to portray Layis as a dutiful and noble knight stumbles when the word “loyal” is used three times in the first four sentences of her storyline.

The font choice exacerbates this. I wanted to know what was happening in Caladrius Blaze, to read what the characters were going through, but couldn’t tell if the text choice was a blessing or a curse. It protected me from noticing some of the most egregious mistakes, as I’d get so frustrated that I’d quickly fast forward through to enjoy more of the action.

Though the text fails these characters, the art doesn’t. Suzuhito Yasuda has done a wonderful job of bringing these people to life, even some do look a little too familiar to ones we’ve seen before. Kei is essentially Devil Survivor 2’s Yamato with black hair. Alex is a dead ringer for Devil Survivor’s Haru. Sophia and Devil Survivor’s Amane were clearly separated at birth. Despite the deja vu, the portrayals fit for each character, capturing elements of their personalities. Maria looks innocent and kind. Nightmare of the Lilith looks manic. Iris is an absolute princess.

When it comes to shoot’em ups, ship variety, bullet patterns, stage layouts, and enemy diversity are all vital elements. But, you can’t discount the importance of a game’s characters and storylines. Caladrius Blaze’s cast is filled with interesting individuals, with both heroes and villains adding all sorts of flavor to the adventure. The localization isn’t the best, especially with that font choice, but the details that do come through and character designs accompanying them make up for it.

Caladrius Blaze is immediately available for the PlayStation 4.