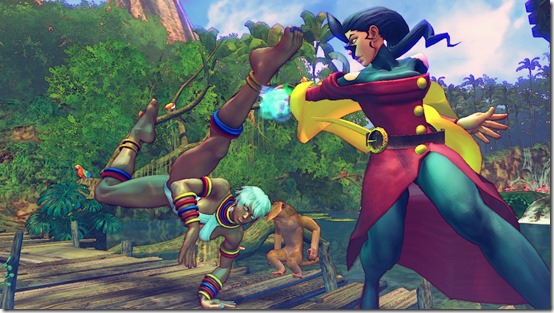 Most of the discussion about Ultra Street Fighter IV has been about the enigmatic fifth character; however, Capcom are also putting effort into rebalancing the fighting game and we asked how they are going about that process.

“Our philosophy this time around has been to make everybody a threat,” said Matt Dahlgren, fighting game manager at Capcom. We don’t want to say these characters are the best in the game and nerf them—that isn’t fair to the players that put a lot of time and effort in learning those tactics. The super powerful characters will have slight modifications, but our real intent is to take the lesser used characters and make them an equal threat as the top tier characters.”

I followed up and asked which characters will be more of a threat in Ultra Street Fighter IV.

“T-Hawk was considered [one of the] bottom five in the game. Some of the requests were to make him faster and give him more tools so he didn’t necessarily have to rely on his command throw,” explained Peter Rosas, Assistant Battle Director on Ultra Street Fighter IV. “We gave people what they were requesting in terms of giving him more focus cancel options, giving him stronger attacks, and things like that. All in an effort to give him a better fighting chance against characters you usually see at the end of a fighting tournament in the top eight.”

Capcom listened to suggestions from fans when rebalancing Street Fighter IV. There was a priority in addressing feedback that was requested more often, but not all feedback could be used.

“What we found was sometimes there was a mob mentality where some guy would request something radical and then everybody would jump in on that and that would make the character a little too strong, so we couldn’t go with those. Things that did made sense that people latched on to such as make Ken walk faster so he has a difference between him and Ryu. Because he’s supposed to have more flair, more speed, more kicks, and things like that. We took that in account. Ken walks faster and his Ultra 1 does a little more damage so it is more of a threat because if you get hit with it now, nobody cares, but they will care in the future,” detailed Rosas.

Rosas continued, “For Cammy, people wanted to nerf her Cannon Spike, but in doing that we would take away the flair of the character, so we couldn’t do that. We did reduce other things that gave her momentum like the heavy attacks that gave her stun and the damage on that because those are instrumental in her combos so she will have to work a little harder to get the same effect she gets now.”

“Another common theme has been unblockables and we are looking at a way of addressing that as well,” Dahlgren chimed in.

Meanwhile, on the new characters front, why were Rolento, Poison, Hugo, and Elena added to Ultra Street Fighter IV instead of other characters from the series?

“When we did open up for suggestions a lot of fans did request to have the characters from Street Fighter X Tekken into Ultra Street Fighter IV. That was one of the big deciding factors as to why they are making an appearance,” said Dahlgren.

“As for the new character, this is a character that I don’t think is on anyone’s radar. It was just something R&D was really passionate about and wanted to put in the game.”