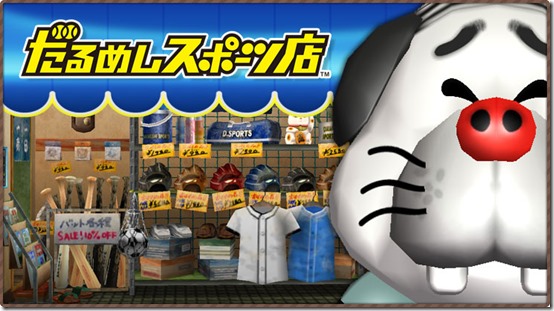 Unlike Recettear: An Item Shop’s Tale, where you play as a cute girl who explores dungeons to collect goods and sell back at the shop, Darumeshi Sports Shop is a 3DS Nintendo eShop title about a gag manga-styled dog named Darumeshi Inuji, who is in charge of running a sporting goods store. It also has various mini-games.

Darumeshi was originally a professional baseball player who loves boiled eggs. After having his wife recently leave him, he must now successfully run a business in order to help feed his ten pups. 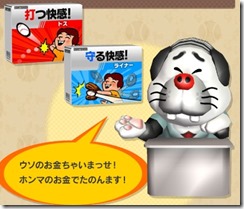 While the Darumeshi Sports Shop game is free, you’ll be helping Darumeshi support his children by purchasing baseball and other mini-games from his shop. The mini-games can be acquired by using real money, but if you take your time to talk to Darumeshi and flatter him, he’ll give you discounts.

Additionally, you can also acquire coupons that will lower the price. Upon purchasing baseball mini-games marked with key symbols, you’ll get to hear more about the poor dog’s story.

The mini-games consist of ten baseball-themed games that test your reflexes and other skills.

The more traditional games like the batting and catching practice come with several modes, such as Challenge and Score Attack, that test your reflexes and coordination. 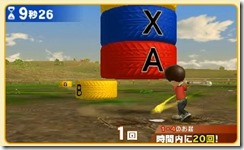 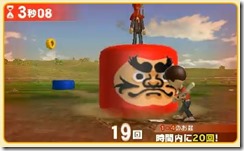 There are also some wackier games, such as the Daruma Hitting mini-game that requires you to hit the right buttons to knock out the tires until you reach the main head within ten seconds.

By playing through the games, you can collect stamps, which can be exchanged for coupons or boiled eggs upon filling the card. The coupons vary from specific amounts or percentages off, or even the much higher “?” marked tickets. 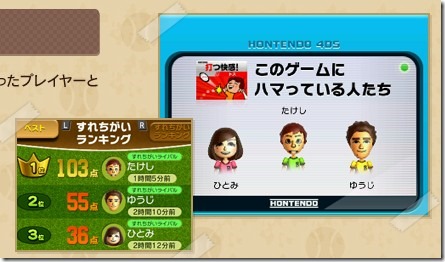 High scores will net you new uniforms for your Mii character. Additionally, the game also has a Street Pass feature that allows you to share scores with other people, while getting a look at their favorite mini-games.

As mentioned earlier, Darumeshi loves boiled eggs. You can give him the eggs you’ve acquired to cheer him up, along with other items to help solve his problems. Upon doing so, he’ll give you great discounts, which can also be further discounted by persuading him a little more.