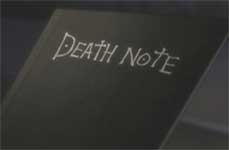 Earlier today, Death Note anime aired its final episode in Japan and while the series has yet to debut on TV, Viz Media is planning to sell the episodes online. The first sixteen episodes will appear on Totalvid.com for $1.99 a piece on June 28. These episodes of Death Note are straight from Japan and they have English subtitles. After the sixteen episodes are released Viz plans to release a new episode every week. Alternatively, to buying each episode you can pay $9.95 for a monthly subscription, wait until the entire series is online and sit through a Death Note marathon.

It’s too bad Viz Media has yet to set up a deal with Microsoft to distribute Death Note and their other series over the Xbox Live Video Marketplace. Death Note premieres would be better enjoyed on a large screen TV.