The first video of Final Fantasy XIII-2 showed Lightning in a dark city fighting a mysterious swordsman. An interview with Xbox Japan reveals the origins of Valhalla. Final Fantasy XIII-2 artist Isamu Kamikokuryo says he was searching for an image to use as a reference when creating the new area. A photo caught Kamikokuryo’s eye in a magazine, a picture of Havana, Cuba. The way the city collapsed was close to what Kamikokuryo had in mind so he used the image as a reference for his concept.

Kamikokuryo says Tetsuya Nomura usually does the core character design, but for Final Fantasy XIII-2 they split costume design among three artists to have more variation. Lightning was Kamikokuryo’s job and tried different ideas – a futuristic look, a tight suit, and a Chinese style dress. He consulted with Nomura who suggested a Western touch, something like a valkyrie with feathers around her waist. 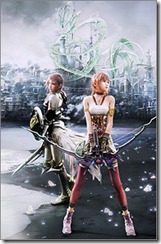 It took Kamikokuryo between one to two months to complete the design for Lightning’s new look.