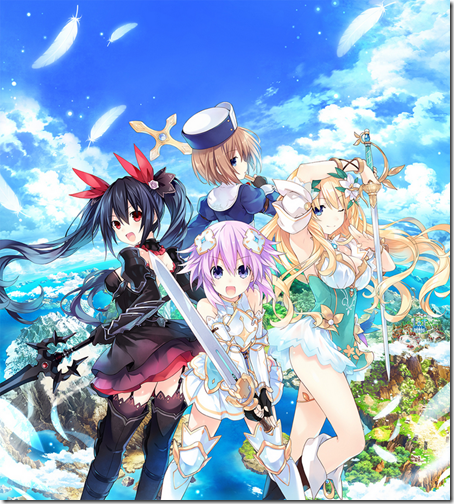 Neptune and friends will jump into an online game for their next adventure in Four Goddesses Online: Cyber Dimension Neptune, and Compile Heart has provided details on the story and main characters on the game’s official website. 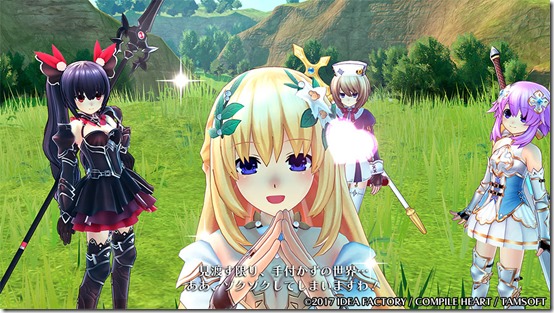 Countries protected by the four goddesses in this world that extends beyond different dimensions.

The world has been saved from danger on several occasions by the goddesses Neptune, Noire, Blanc, and Vert, and the four have been chosen as beta testers to participate in a certain online game.

It’s an extremely popular game that actually features the goddesses of Gamindustri as official models.

The game takes place in the fantasy world of “Arsgard,” surrounded by green and blue, with a towering World Tree.

As the four login to the game’s world, they meet a guardian responsible for advising new players named “Bouquet.” They learn from the guardian that the players of Four Goddesses Online are the “Chosen Ones,” and that Arsgard is currently in danger from the demon lord.

To save the world, encounter their other selves, make new friends, and get little sisters, filled with thoughts in their hearts, the goddesses will step foot into the Cyber Dimension. 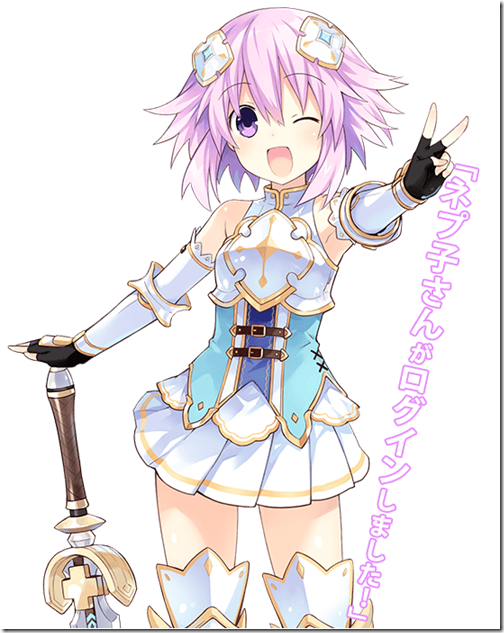 Planeptune’s guardian goddess. An overwhelming protagonist and face of the series, she’s even in the title. She has a bright and optimistic personality, and is always excited for no reason, and you can expect her to be her usual oblivious self even in the online game. There’s a mysterious charm about her being able to take on just about any adversity or serious situations. In Four Goddesses Online, her job class is Holy Knight. It looks like she’ll be a powerful character with the ability to do everything from physical attacks to magic attacks and even heals. 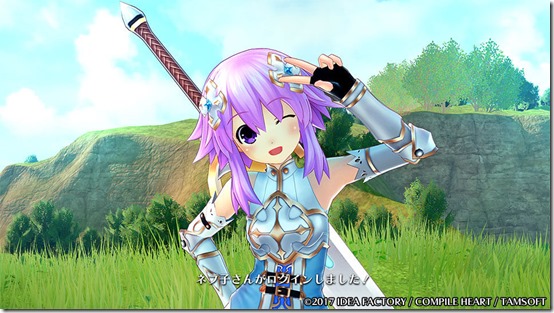 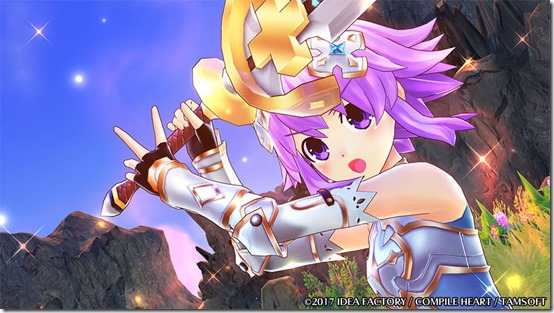 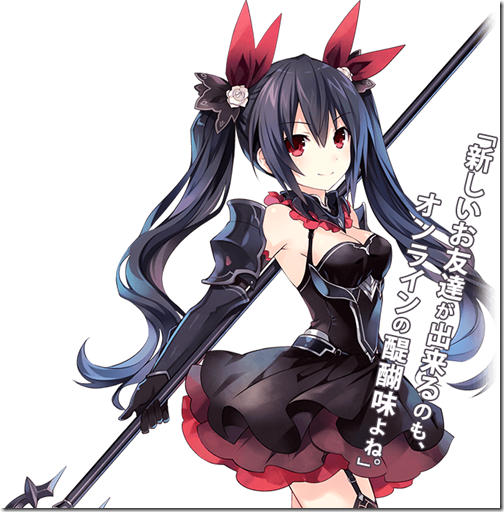 Lastation’s guardian goddess. She’s earnest and has an elitist nature, she does everything on her own, and is a tsundere who can’t be honest with those who are closer to her. People assume that she’s lonely because of such personality, but seeing how she has buddies to play games with, she’s not actually a loner. She’ll do anything she can to hide this from those around her, but she’s interested in cosplaying, and has even been looking up things to cosplay in Four Goddesses Online. In the game, she’s a Dark Knight. She only has skills that specialize in close-ranged combat, and is considered a DPS with high power. 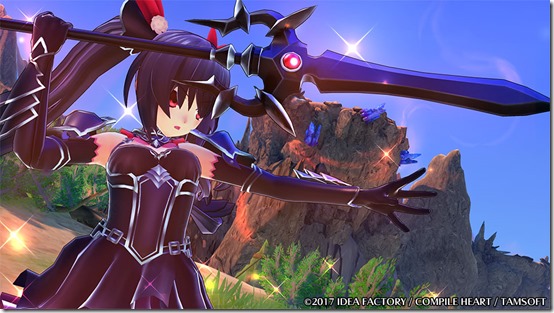 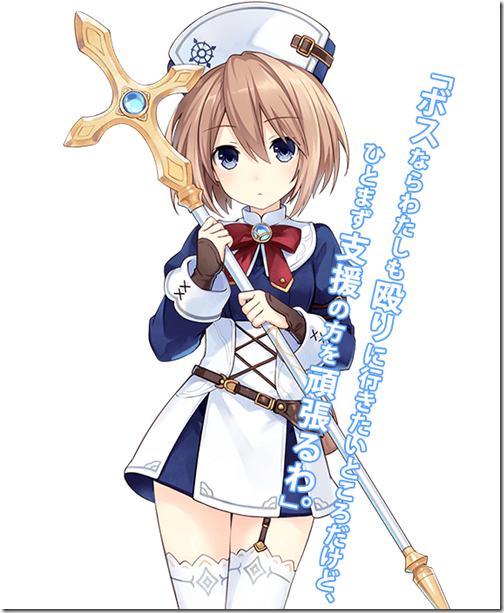 Lowee’s guardian goddess. She’s usually quiet, but when her stress builds up she can snap and go out of control. She likes to read, and secretly tries selling her own light novels, but they don’t seem to sell that well. She seems to be playing Four Goddesses Online to look for new material for her writing. In the game, she plays a Cleric class. In addition to healing abilities, she’s able to provide support to the party with her skills. 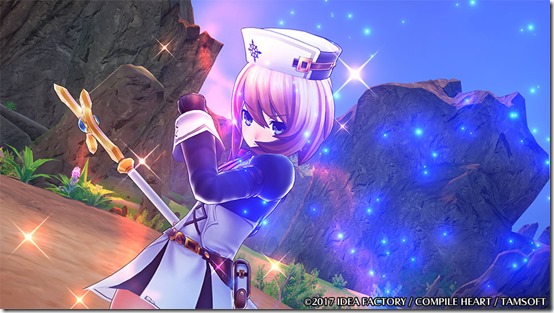 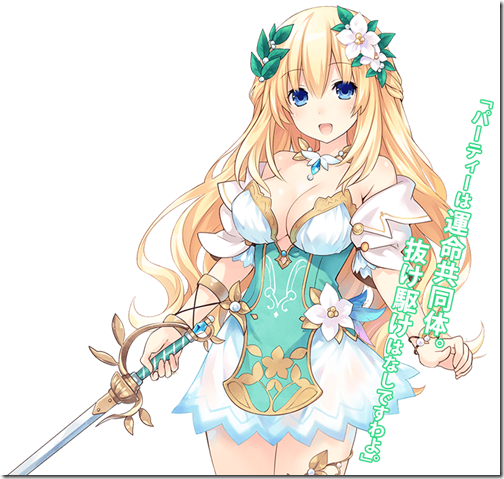 Leanbox’s guardian goddess. She has an adult-like appearance and a soft demeanor of an older sister, but deep down she’s addicted to games and is a fujoshi. Her room is filled with all kinds of otaku goods. this time around, since the stage is set in her favorite online game genre, she’s secretly aiming to become the protagonist. She’s the only one out of the goddesses without a younger sister, and the moment she finds a girl she likes, she does everything she can to make her into her younger sister. In the game, she plays an Enchantress class, a hybrid class known for being able to provide allies with buffs, and can also heal and attack. 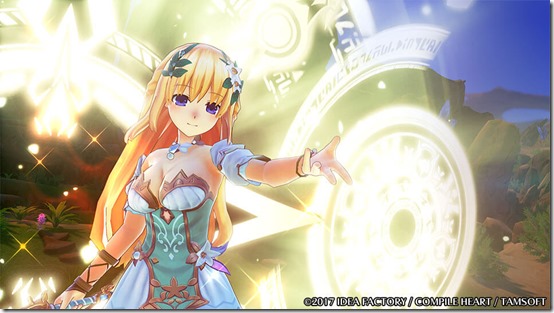 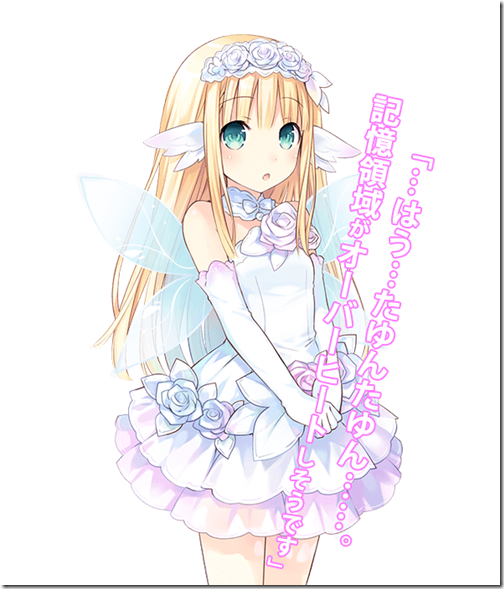 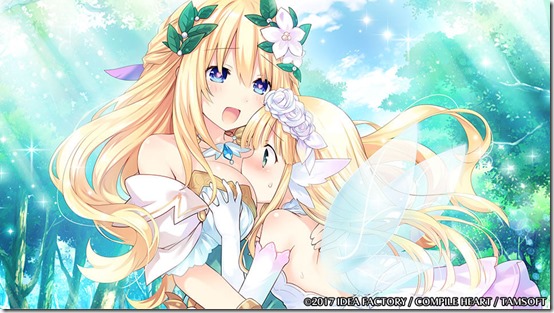 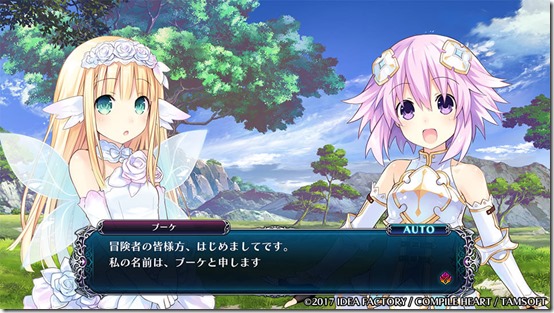 An NPC who appears in Four Goddesses Online, and is installed with artificial intelligence for the purpose of conversation. She’s a guardian spirit, or “Royal Geist,” responsible for maintaining order in Arsgard. She helps out adventurers with tips in all kinds of places. Vert, who has been wanting a younger sister forever, falls in love with Bouquet at first sight, and the NPC has since then been the target as her next younger sister candidate. Bouquet is earnest and studious, and she immediately looks up words that she doesn’t understand when they come up in conversations. 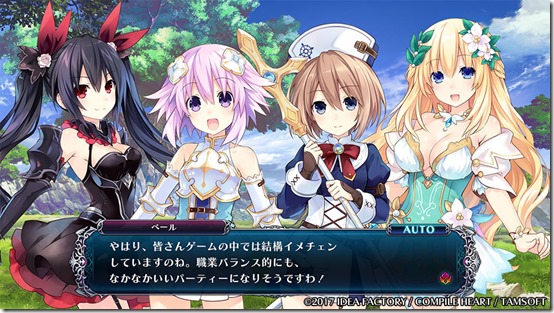