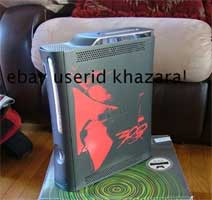 Only ten people got them at San Diego Comic-Con and khazara informs us that he (she?) is selling his (her?) limited edition Xbox 360. As explained in the auction the task was more arderous than sitting in a cushy seat waitng for your number to be called.

Contrary to the press release not everyone of the 6,000 attendees was entered to win; you had to have received a special sign at the event in order to be eligible, and my personal estimate is that no more than 20 to 50 of these were given out.

When told to "battle", I had to run from my seat to a particular section of the stadium.  The first 10 there got one of these super-rare fantastic 300-themed XBOXes.  I was number 10.  People came right after me that were told they were too late.

Battling for the pride of owning a special Xbox 360 elite? That seems fitting with the theme of the 300! I just wish I went to the screening to tape the action.