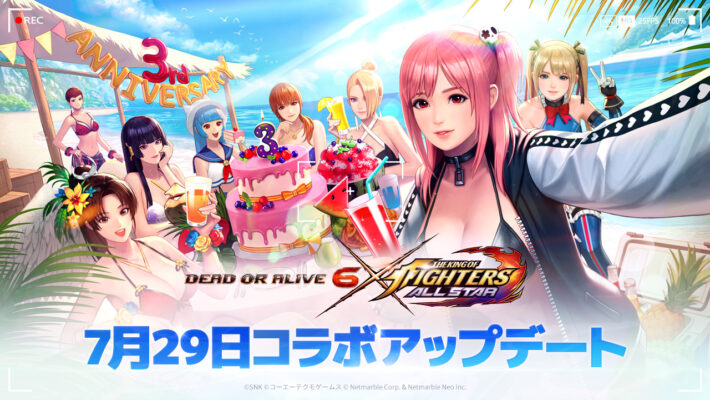 The King of Fighters Allstar is holding a Dead or Alive 6 collaboration event from July 29 to August 19, 2021, in which players can collect Kasumi, Nyotengu, Marie Rose, and Honoka as fighters. Along with swimsuit versions of the collectible characters, there will also be check-in rewards and three new Dead or Alive-themed dungeons to fight through.

Starting July 29, 2021, players can collect SS Honoka by summoning fighters in the Carnival event. SS Marie Rose is available through clearing in-game missions. SS Kasumi will also be available, along with the swimsuit Angel of Paradise version of Nyotengu and Marie Rose. On August 5, players will have a chance to get SS Nyotengu, as well as Angel of Paradise Kasumi and Honoka.

For 14 days, new players will receive various item reports upon logging into the game, including 200 summon packs as well as two test fighters. The new dungeon, Beach of Paradise, will reward players with rubies and Level Up items upon clearing stages with Dead or Alive characters.

The new Rush Dungeon will also allow players to fight with Dead or Alive 6 characters in order to earn collaboration-themed affinity items. Finally, the Advent Dungeon will pit players against a team of The King of Fighters Kasumi and Dead or Alive 6 Kasumi. Upon defeating the doppelganger duo, players will earn coins that can be traded for Dead or Alive 6-themed Option Cards and Imprint Stones.

Netmarble has also released five new trailers for each fighter, including an additional trailer for the Angel of Paradise version of Marie Rose, showcasing each fighter’s abilities and moves.

The King of Fighters Allstar is immediately available on iOS and Android devices, and the Dead or Alive 6 collaboration event will run from July 29 to August 19, 2021.