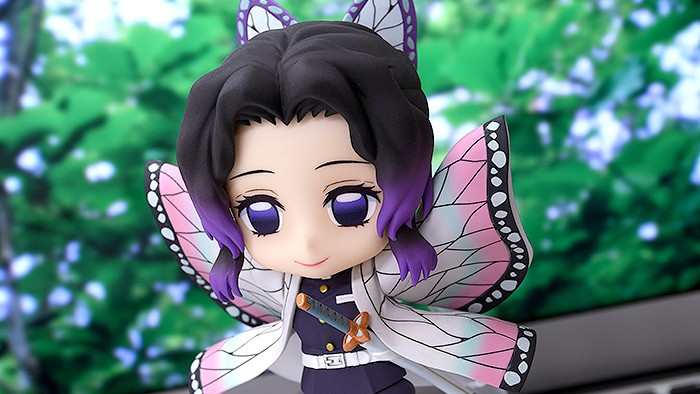 The next Demon Slayer Nendoroid will be Shinobu Kocho, and pre-orders will open on July 8, 2021. Ahead of her official debut in the store, Good Smile Company’s Kahotan offered insight into what people can expect from the figure. Kahotan also shared an array of photos taken of the figure in different poses and in different accessories.

This Shinobu Kocho figure will be wearing her traditional uniform. However, it will include parts to make the Insect Hashira’s haori look like wings. She can wield her Stinger Nichirin Blade or a needle, to reference the fact that she’s both a warrior and known for being able to make poisons and antidotes. (The sword also comes with slashing effect parts.) She has a butterfly-shaped hair accessory. You’ll also get three face plates. One has her smiling with her eyes open, another features a smile with closed eyes, and the final one looks like she is taunting a foe.

Shinobu Kocho will be the ninth Demon Slayer Nendoroid. There are two versions of Tanjiro Kamado available, as well as his closest allies Nezuko Kamado, Zenitsu Agatsuma, and Inosuke Hashibira. Sabito and Makomo also ended up being turned into figures. As far as Hashira go, she’ll be the third to appear. Previously, the Water Hashira Giyu Tomioka and Flame Hashira Kyojuro Rengoku appeared. It’s unknown if we’ll eventually see one of Kanae Kocho too.