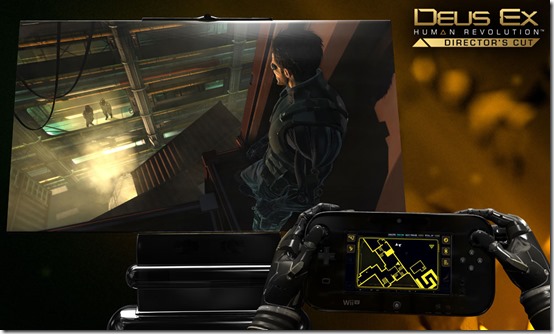 In a hotel suite, not far from the PAX East 2013 show floor, Square Enix was showing off the upcoming Wii U version of Deus Ex: Human Revolution. Given that the game will soon be two years old, does the port pack enough brand new material to warrant additional time spent with Adam Jensen? That’s what developer Eidos Montreal is assuming and hoping.

In fact, according to Emile Pedneault, a game designer for the upcoming release, the Director’s Cut is the definite vision of Deus Ex: Human Revolution. First thing’s first: it’s the full game, along with the Missing Link DLC, seamlessly integrated. In the original, there’s a span of time that’s fast-forwarded, about three days that’s missing. The DLC, which was released afterwards, filled in the blanks. Well, now those missing days are simply inserted in the empty spot. 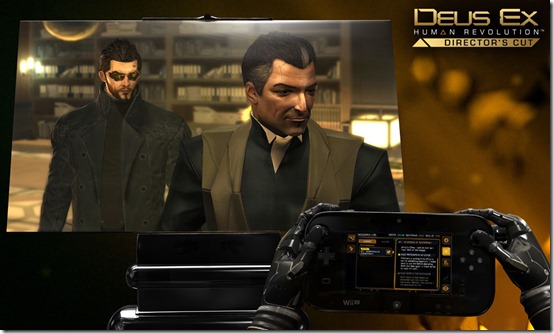 There’s also new features that take advantage of the Wii U’s GamePad; called Smart Vision by Pedneault, you can hold the controller up to you TV screen, to catch wind of brand new information as it pertains to characters and other on screen elements. You can also take a screen cap of a particular scene, put down annotations, like insight as to how to solve a particular puzzle, and then share it with others via Miiverse.

The game also packs in an entire strategy guide, which can be easily referenced on the fly, via the GamePad’s screen. And on that note, to make the experience a tad bit easier to those new the series, the easy and normal difficulties have a second energy cell. Plus you can play the whole thing on the GamePad entirely if you’d wish. Though for returning players, there’s director’s commentary; a voice over will kick in, if the option is chosen, at specific parts. There’s eight hours in total I was told.

But everything described above enough to draw old players back in? It’s perhaps worth mentioning the graphics. It was explained that the visuals are the strongest yet, mostly due to the improved lighting. Apparently, the aforementioned DLC had improved visuals, over the original game, and its algorithms were simply applied to the game as a whole. But even still, is all that enough? 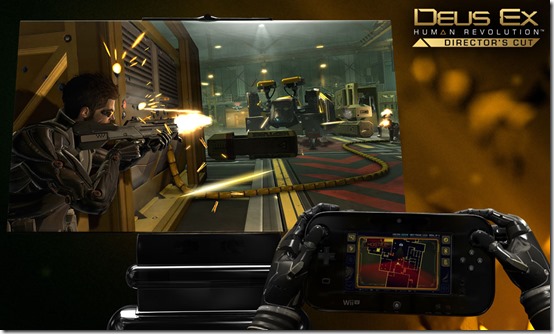 There is one more key detail: the boss fights have been completely redone. "We listen to feedback, 80% of everything that is new in the Wii U version is based upon what players had to say, and we know that the boss fights got the biggest criticism," explained Pedneault. Every boss fight has been recreated from scratch.

Not necessarily the bosses themselves, but the environment that surrounds them. The biggest issue was how the main game allowed one to tackle challenges as they pleased, which includes being a hacker the entire time. Not a single bullet needed to be shot… until a boss showed up. Then you had to pull the trigger, whether that was your preferred method of problem solving or not.

Apparently, that’s no longer the case. The one face off that Pedneault demonstrated featured a much larger layout. "Those who are into path finding and hacking will be rewarded" he added. So yes, you can defeat bosses with just pure hacking skills alone. 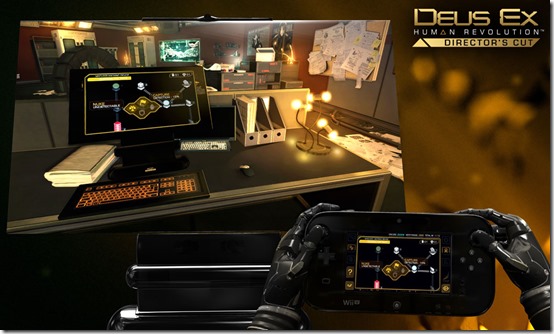 Hacking is now done with the GamePad’s touchscreen, which according to Pedneault, "is the way it was meant to be done." And indeed it does seem more natural. Otherwise, and in addition to the Smart Vision mode, which surely will not be everyone’s cup of tea, the Wii U’s controller also sports an improved radar, which is a hybrid of the regular map and the radar that previously only showed the enemy’s location.

Given how much the boss fights were universally panned, along with how hacking itself was so popular, these latter editions alone might indeed entice players to buy into Deus Ex: Human Revolution for a second time. But what about those without Wii U’s? Will their boss fights be forever borked? When asked if the improve boss battles would ever come to existing owners of the game, in the form of the patch, Pedneault responded, and with a certain degree of noticeable enthusiasm: "Right now we are concentrating on making the Wii U release the best it can be, but we are totally open to the idea!"