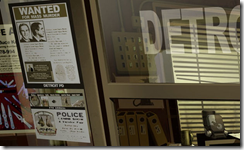 You may have seen a controversial, perhaps unflattering screenshot, of a Detroit police station from Deus Ex: Human Revolution.

So, will Deus Ex: Human Revolution have an undercurrent of political commentary? I asked Jean-Francois Dugas, Lead Game Designer, about the screenshot.

He let out a stifled laugh and rolled his eyes when I brought the topic up. I wondered, for a second, if I wasn’t the first to do so. “That was concept art that was internal. Sometimes, the artist they do stuff, they put in crazy stuff in we laugh. Internally, it is supposed to be fun, but it’s not meant to be released,” Dugas clarified.

“It was in no way a political statement whatsoever. It was someone, somewhere, thought it was fun and that’s it.”