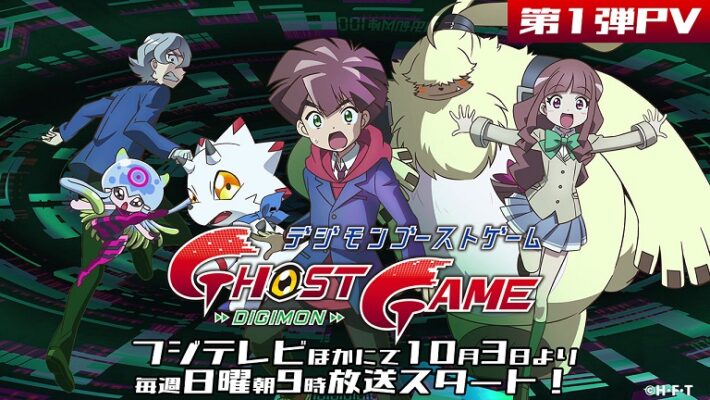 Toei Animation has released the first PV for the upcoming Digimon Ghost Game anime. It gives viewers an idea of the show’s atmosphere, plot, and characters, while leaving room for intrigue. [Thanks, ryokutya2089!]

The video starts with several people discussing the hologram ghost urban legend. An example of paranormal activity caused by hologram ghosts includes clocks going crazy, but as any Digimon veteran knows, this is actually the work of Digimon. Indeed, the hologram ghosts are actually Digimon. Shockingly, the Digimon actually seem capable of sucking the vitality right out of a person, turning them into a haggard husk.

From the short PV, we can see Gammamon’s bright personality in his introduction with Hiro. Ruri also shows off a cheeky smile, while Kiyoshiro’s little clip seems to hint at a rather stuck-up personality. Despite this, the band-aids around his hand and the fearful expression he has on the promotion art show that he’s more than just an elitist genius. Angoramon and Jellymon do not make appearances in the PV, but may show up in the future. The PV finally ends with the narrator saying, “They are right by your side,” which seems to be the catchphrase for the show.

Digimon Ghost Game will premiere on October 3, 2021 in Japan. This means that it will start airing right after the end of the current Digimon Adventure reboot. It is currently unknown if an international licensing company has picked it up.