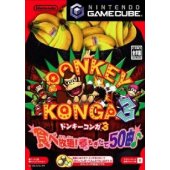 It’s been over six months since the release of Donkey Konga 2: Hit Song Parade. For all of the Donkey Konga fans out there Nintendo’s next installment chimes in with a whopping fifty songs. The first game and the second game each had a respectable 32 songs. Whereas Donkey Konga 3 almost doubles the song total of both games. The song list includes a large number of anime themes. You have Seishun Kyousou Kyoku, the current Naruto theme song  plus a past Naruto theme Go!. There is the Full Metal Alchemist theme: Relight, Baka Survivor from Bobobo-bo and Ignited from Gundam Seed. For you classic anime fans there is Cha-la Head-cha-la from Dragon Ball Z and Touch from well Touch. There is some J-Pop in this mix, notably Hana from Hamasaki Ayumi and Kore Ga Watashi no Ikiru Michi by Puffy Ami Yumi. The biggest surprise on the song list is either La Cucaracha or B-I-N-G-O.

Besides the J-pop, classic songs and the heavily slanted anime soundtrack Donkey Konga has always had songs from other Nintendo titles. In this mix there are some tracks from the recent Donkey Kong: Jungle Beat. You have the main song Jungle Beat and Banana Kingdom hidden in the anime section. There are themes from other Nintendo games, like the main song from Smash Brothers, a song from Star Fox and a rendition of Mona’s Pizza from Wario Ware Twisted. The real treat for Nintendo fans is to be unlocked. There are fifteen classic Famicom themes hidden within the game. Songs you’re sure to recognize come from: Super Mario Brothers, Dr. Mario, The Legend of Zelda and Kirby. Having a bunch of classic Nintendo songs is a definite treat.

Besides the song list Donkey Konga 3 is pretty much Donkey Konga. If you’re unfamiliar with the gameplay here’s a quick rundown. The game plays a lot like other music games with set notes that you need to play with your bongos. A yellow icon indicates to hit the left drum, a red icon prompts you to hit the right drum and if it’s pink you need to hit both at the same time. Something interesting that Donkey Konga adds a clap. Built into the bongos is a small microphone that can pick up the sound of  you clapping. Picking up Donkey Konga is a bit easier than say Beatmania IIDX or Pop N’ Music. With a little practice you’ll be clapping and drumming to the beat. That’s not to say that there isn’t any challenge in Donkey Konga. There’s plenty to be had between a hard mode and unlockable extra hard songs.

While the gameplay didn’t change there are a few different modes in how to play the game. The first addition is the shuffle option. Shuffle mixes a songs claps and drum hits around. Notes remain in the same position, but a left drum hit could change to a clap. This option adds in an extra challenge after you’ve memorized every beat. By the time you’re a pro, you’ll be able to try out Trial Mode. In this mode you’ll be given tasks by Cranky Kong to beat. Most of them are straight forward like get a certain score or beat a computer player. They’re still challenging beating a computer controlled Diddy Kong could mean getting a really high combo. For multiplayer action you can play with up to four players in the normal mode or you can select battle mode for competitive play. Battle mode has the interesting addition of a Star Fox themed card game. Hitting "stop" notes not only gets you a great or bad, but it gives you a card. If you match three cards in a row you can get a bunch of bonus points. Three Fox McCloud cards, which you get from three "greats", will give you 10,000 extra points. Even three Slippy’s which you would get from three off beat "bad" notes would get you 3,000 points. This makes for some interesting strategy. If you’re not into competitive play there is concert mode. Up to four players can play concert mode. This mode adds in new notes, like a clap that that everyone needs to hit at the same time. Mastering the team notes is the way to a top score in concert.

One of the best inclusions is the free play, Adoripu Plaza mode. This gives up to four players free play. That’s play without any notes to follow you just bang the drums to your own beat. Few music games let you do whatever you want, which makes this a fresh addition. Once you start free play you can switch songs and drum sounds by pressing the start button. Each time you hit the a drum or clap a character from the Donkey Kong series will appear like DK himself, Cranky Kong and even giant bananas. It’s an amusing visualization along with changing backgrounds that makes Adoripu Plaza entertaining.

A big disappointment is the lack of mini games in Donkey Konga 3. Instead of Donkey Konga 3 being a party game, it opts for a single player story mode. The story mode describes a special tree that blooms bananas, which you can get every 100 days. You don’t have to wait a hundred real days to play the banana mini game, normally half an hour of play will cause bananas to bloom. When there are bananas on the tree there is a mini game that involves aiming DK to grab them. The game is kind of fun to play, but it’s no replacement for a multiplayer game.

Donkey Konga 3 runs on the same engine as the first title, which wasn’t a graphic showcase to begin with. Like most music games Donkey Konga has some simple background visuals to keep people interested while they wait their turn. The few backgrounds in the game showcase different seasons. There is a winter background that has giant smiling snowman and a fall themed background where you move through a pumpkin patch. Even if there were some eye dropping graphics they would just be a distraction from the on screen notes.

Donkey Konga 3 is more of the same. Just much more of the same in a single package. If you’re into Donkey Konga at all you should pick this disc up. 50 more songs, with twenty of them being Nintendo hits is a strong selling point. Importing this is a good idea. Because there are some really great Japanese tracks that are sure to get the ax when an American version is released.

The Japanese menus may look intimidating. After a few minutes of playing with the menus you’ll be on your way.

While a release of another Donkey Konga expansion disc is inevitable, it is unlikely it will feature any of the Japanese songs feature in this version. The Nintendo theme songs and 8-bit renditions should remain intact.

– Cons: What happened to including multiplayer mini games?

Overall: The free mode and 50 songs makes Donkey Konga 3 is a must for those addicted to Nintendo’s rhythm game. Other gamers might be turned off by the similarities to the first title and the lack of extra games.