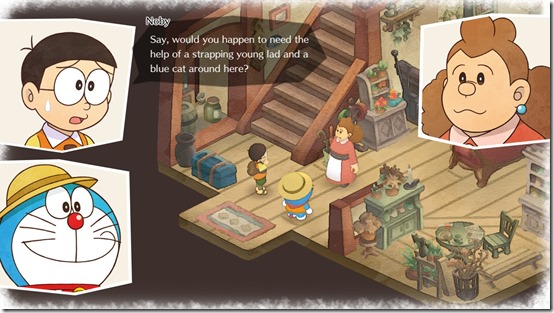 Most farming simulations can make your daily activities feel like a job. Which makes sense, because you are working in the fields and attempting to earn a livelihood for yourself. Some Harvest Moon games even gauge your success and have win conditions depending on how efficient and profitable you are. Doraemon: Story of Seasons is a different sort of game. While it has that Story of Seasons connections, things are much less strenuous here. Everything about this farming sim is about going at your own pace, and the result is a more relaxing game that has a soothing atmosphere other farming games might lack.

A part of this stems from its lead and his reason for being there. Noby Nobita is a lazy kid. It’s his defining characteristic in the Doraemon series! That, and the whole his being a child thing. Not long after Noby, Doraemon, Big G, Sneech, and Sue come to Natura, the group is told by the mayor that all residents, kids included, are expected to help contribute. Now, since they are children, they aren’t expected to completely handle full jobs, but they are supposed to help out. So, Nobita is more helping out Harmon and Ravi with their farm, rather than being tasked with completely revitalizing it on his own. You’re aiding others while trying to find out what happened and looking for a way home. It isn’t like other Story of Seasons games or something like Stardew Valley, where you want to have a major operation. 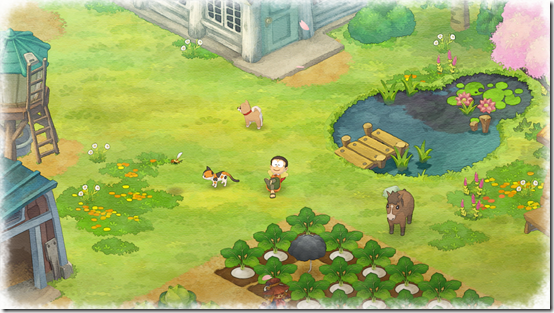 The relaxed nature comes up with other people’s shops in-game too. In most Story of Seasons games, every shop tends to have the same hours and be open the same days. Let’s use Story of Seasons: Trio of Towns as an example. Almost all Westown stores open at 10am, while almost every Lulukoko and Tsuyukusa shop opens at 8am. They’re open every day. In Doraemon: Story of Seasons, each shop has two days each week where they are closed and have different hours of operation. If you go to buy cattle or chickens, you’ll be able to stop by at 9am. The blacksmith, carpenter’s shop, and clinic each won’t open until 10am. The general store is only closed one day each week, Thursday, but it doesn’t open until 3pm. The restaurant won’t open its doors until noon. Want to fish? Better make sure it is a Sunday, Tuesday, Thursday, or Saturday. But, at least that opens at 8am! It’s a different sort of lifestyle here, where people get to move at their own pace.

Noby’s napping is also an important mechanic. While this can be used to help you be right at a location when an event is about to happen or a store will open, which we brought up before, it has another practical feature. As with other Story of Seasons games, there is a stamina option in Doraemon: Story of Seasons. If Noby runs out of energy, you can nap to restore it. If you have him sleep for an hour, it will restore 10 stamina. It’s a rather big deal, especially coming from older games where when you ran out of energy and you didn’t have the hot spring access, kitchen for making restoring foods, or money to spend on meals, you would just have to go to bed early and continue another day. Here, you don’t have to drag things out. You can have Noby take a moment for himself and come away a bit better. 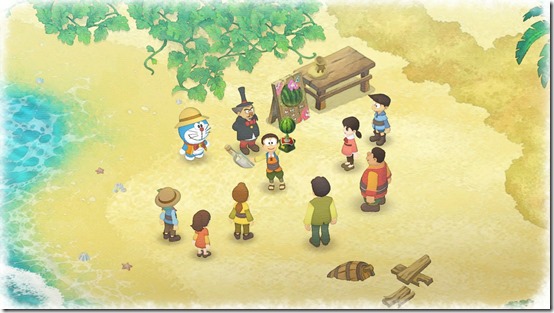 The relaxed pace comes up with the number of holidays in Doraemon: Story of Seasons too. There’s a lot going on from day to day. In spring, right off the bat, Noby has four events to go to. He can go to the Spring Thanksgiving on the 14th, the Horse Race on the 18th, the Spring Harvest Contest on the 28th, and the Cork Rifle Event on the 30th. When summer comes, it starts off with a Split-the-Watermelon event on the 1st, then continues with a Beetle Race on the 7th, a Chicken Contest on the 14th, a Fireworks Fest on the 18th, and a Summer Harvest Contest on the 28th. Things are constantly happening, and people are taking time off to enjoy themselves.

People really get to take their time in Doraemon: Story of Seasons. It’s more about making memories and savoring the experience, rather than rushing through from day to day so you can build up your farm and make more money so you can reinvest and become even bigger and more profitable. I mean, you do have that happening too and could try and speed up your productivity, if you want. But for the most part, it feels like a more low-key sort of farming game that is about living in the moment, rather than trying to be the absolute best.

Doraemon: Story of Seasons is available for the Nintendo Switch and PC.