Joylancer uses only two core buttons with which you jump and perform high-speed drill lance attacks. That’s all you need. It’s a game about a “motor knight”, and so like one of BioShock’s Big Daddy’s, you thrust a rather large drill into your enemies.

The drill lunge works in the air, too, meaning that you can charge it up, leap into the air, and chain combos together by canceling attacks for a number of motorized ground-to-aerial stunts among crowds of enemies. 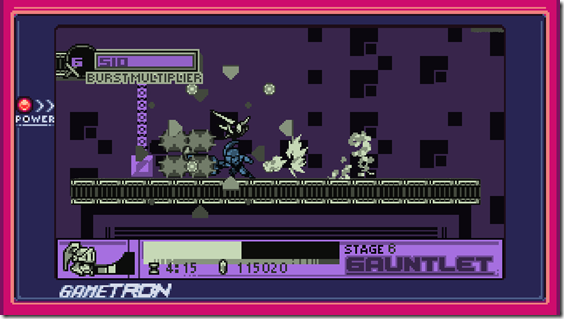 Aside from serving you well during battles, your drill lance can also be used as a skateboard to grind down rails at high speed. Other platforming sections will see you shot through cannons (like in Donkey Kong Country), and performing tricky jumping maneuvers.

Joylancer has a number of different arcade modes, special time trials, and also supports for up to four players in intense couch-multiplayer matches. You’ll notice in the new trailer above that you’re able to customize the colors in the game to your liking, too – it doesn’t have to be Game Boy green.

You can currently purchase early versions of The Joylancer for $10 on itch.io and Desura. The pricing of the Steam Early Access release hasn’t been revealed yet. For more information head to the game’s website.