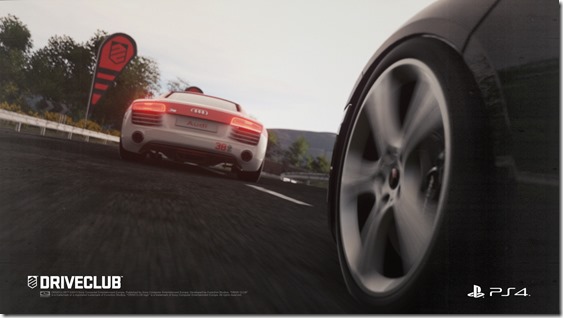 Before I played DriveClub, a representative from Evolution Studios made it clear that they they’re not trying to make another Gran Turismo. Sony already has a driving simulation game series, so DriveClub was designed from the ground up to be a different kind of racing game.

DriveClub starts by taking your picture with the PlayStation Eye. The photo becomes part of your license and photos appear above ghost cars kind of like Mario Kart Arcade GP or Ridge Racer 3D. While I was driving a McLaren around the track challenges popped up like seeing how far I could drift and what top speed I could get up to along a certain length of track.

Many of the challenges in the demo were geared towards stylish driving rather than getting to the finish line first. These challenges were preset for the E3 demo, but DriveClub will adjust the kind of challenges and skill level when the game comes out.

You can play DriveClub using either motion controls or the analog stick and buttons. I tried both out and at least for me DriveClub is easier with traditional controls. Motion controls turn the DualShock 4 into an incredibly sensitive steering wheel. Tilting the controller just a tiny bit makes the car turn. The rep from Evolution Studios says they are still fine tuning the motion controls for DriveClub.

DriveClub is slated for release alongside the PlayStation 4’s launch.