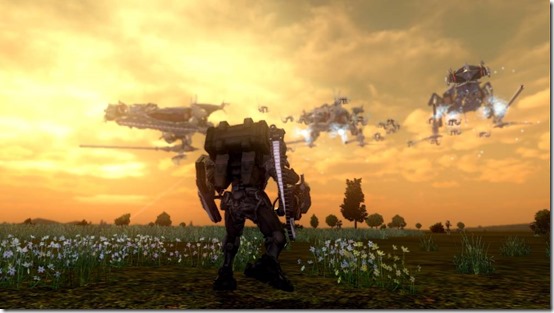 D3 Publisher will release a pack of five downloadable missions for Earth Defense Force 2025. Additional Mission Pack 1 has… battles with giant ants and Hectors, humongous bipedal robots that the series is know for. These five missions don’t appear to be that much different from other Earth Defense Force missions, which have players exterminate giant ants, robots, spiders or dragons. The pack is paid DLC too, 400 yen on PS3 or 320 Microsoft Points on Xbox Live.

Giant creatures have been spotted in a mountainous area, find where they’re coming out from and destroy the entrance to the tunnel.

A unit of Hectors with particle stream cannons on both arms invaded the town. An armored unit failed to defeat them, so now it’s your job to clear the Hectors.

Giant creatures are in the harbor area. Exterminate them and destroy the tunnel entrance.

More enemies are in the harbor area and you’re going to initiate a first strike on them.

If D3 Publisher can add a cameo character to Onechanbara they can think of more creative missions than these, right?