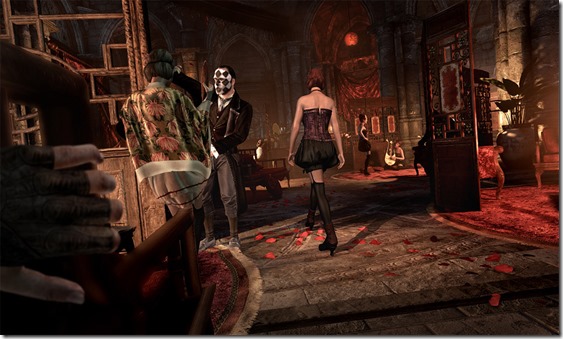 At E3 last week, at a behind-closed-doors roundtable with journalists, Daniel Windfeld Schmidt of Eidos Montreal answered questions regarding the studio’s upcoming reboot of Thief. As you may know, Thief isn’t their first stab at reinventing a beloved, classic PC gaming franchise. When asked if there was any added pressure, or if they were perhaps used to such a high level of scrutiny by now, since the studio’s previous effort was Deus Ex: Human Revolution, Windfeld Schmidt responded with:

“Oh yeah, there’s a lot of pressure. In people’s minds, nothing will ever be able to top the Thief that they spent so much time with, back in the day. You simply can’t match those memories. And as time goes on, they become exaggerated. If you went back and played the original Thief now, it’s not as friendly as maybe you remember it. I’ve been trying to replay it, and there’s a couple of hurdles that are difficult to get past. But that was just the standard at the time. But today, people’s expectations are very different.

“You expect games to be more user friendly. You want everything to be just fluid… you want the challenge to be inside the game, and not be in the menus, not with the controls. And that’s a big thing we’re trying to do; making the challenge reside within the core game, and not anything that surrounds it.”

In the end, it would seem that Eidos Montreal have gone through the wringer when it comes to fan feedback, and therefore know what to expect. But that doesn’t make things any easier. Especially since they seem to quarrel a lot, amongst themselves. Says Windfeld Schmidt:

“Among Thief enthusiasts, there’s a certain level of… animosity? ‘Which one is the best one? That one had the best features! No, that one!’ A lot of internal conflict, so you can never make anyone happy. All we can do is concentrate on what we believe will make it a solid experience and work on that, and hope that those who really enjoy the series will feel that essence is there. We’ve also addressed the diversity of players out there, because we want new people to embrace this game, along with hardcore fans, who already have a way of playing that they’re used to.

“So, one of the things we’ve done is to give everyone a lot of ways to customize the way they play. Do you want feedback? Do you want icons? Do you want navigation markers? Do you want contextual help? All these things are completely customizable.”

One of the biggest points of contention among old school fans, according to Windfeld Schmidt, is the brand new Focus feature. As the name implies, it offers the player guidance as to where to go next, as well as what objects in the immediate vicinity can be interacted with. But alas, not everyone is a fan of the idea.

“It’s huge addition that one will be able to see the value of. Once you start playing it, you’ll see the value of it. Still, many people have rejected the idea of it already, which is fine. We’ve listened, and it can be removed from the game. We’ve haven’t figured out the exact details, but before you start the game you can choose old school mode that disables it completely. You do not need it to complete the game.

“If you just want to play a solid, ground-based, authentic Thief experience, you know what? Have fun. It’s going to be a little tougher… you’ll need to pay attention, you just can’t wing it. But that’s how we’ve addressed concerns about people being able to play how they want to.”

Thief is in development for PC, PlayStation 4 and Xbox One.