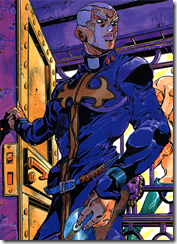 Namco Bandai’s upcoming fighter, JoJo’s Bizarre Adventure: All-Star Battle, will feature a cast of over 30 characters spanning across multiple story arcs from the manga, in an all-out action game for PlayStation 3. Dio Brando and Enrico Pucci were previously confirmed to be in the game, and the latest news reports that Enrico will in fact be the sixth boss character of the game.

Enrico Pucci’s Stands can evolve and will have three different forms, which will rely on performing various moves. Whitesnake will have the ability to capture the opponent’s memories and Stand abilities, then seal them into a disc.

During this moment, those who are affected by this ability will have certain commands be disabled.

The Green Baby, which was born from  Dio’s Bone, will play a role in evolving it to its C-MOON Stand. This form will have the ability to inflict opponents with  a “Flip” effect, followed by attacks that slowly drain health.

Finally, the C-MOON will evolve into the final Stand, Made In Heaven, after successfully pulling off the Great Heat Attack. Made In Heaven will have the ability to infinitely accelerate time, which results in all characters apart from Enrico being slowed down.

JoJo’s Bizarre Adventure: All Star Battle is slated for release on August 29th for PlayStation 3 in Japan.