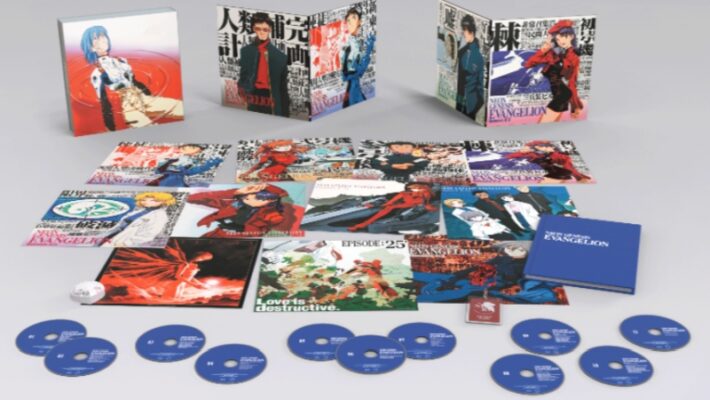 GKids’ full Blu-ray collection of the original Neon Genesis Evangelion anime, the Evangelion Ultimate Edition, will return for pre-orders after the initial batch sold out. GKids Films announced via Twitter that a “very limited” number of pre-order units would be available starting on September 9, 2021 at 11am PT/2pm ET.

The GKids Films Blu-ray release comes in multiple editions, including a Collector’s, Standard, and Digital Download edition. Like all the others, Neon Genesis Evangelion Ultimate Edition will include the complete original TV series, as well as the two follow-up movie releases, Evangelion: Death (True)², and The End of Evangelion. However, the Ultimate Edition sets itself apart in terms of included physical bonuses, in addition to the eleven discs that contain the content.

The Evangelion Ultimate Edition set will include exclusive packaging and more than five hours of bonus features. The bonus features include commercials for the original releases of Neon Genesis Evangelion, Japanese voice auditions, animatics, and even deleted live-action scenes originally destined for The End of Evangelion. It will also have additional audio and subtitle tracks based on the original releases of the series and films. The default dub and subtitles are otherwise based on the new dub and translation commissioned when the series was acquired by Netflix. One thing that will be missing, however, is the song “Fly Me To The Moon”, which played over the end credits of the TV show. Licensing issues prevented the song from appearing in international releases of the series. The set will have eight special art cards, but the Ultimate Edition also includes artwork based on the LaserDisc releases, a paperweight based on the 3rd Angel Sachiel, a NERV ID card and lanyard, art boards, as well as a 156-page book.

The Neon Genesis Evangelion Ultimate Edition will cost USD $274.99 to pre-order. The standard price is $349.99, and that will take effect when the set is released on December 8, 2021.  The current batch of pre-orders will become available on September 9, 2021, going live at 11am PT/2pm ET.