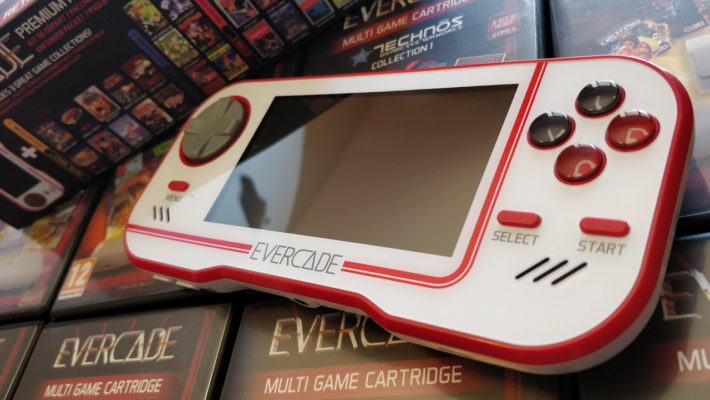 Evercade, the new handheld retro-focused console from UK-based Blaze Entertainment, looks to carve out a space for itself in an increasingly populated world of nostalgia devices. It takes a promising approach: to veer away from both the tinkerer-focused open devices for hobbyists and the first-party dedicated boxes that are limited by platform. It makes some divisive choices! But it makes them clearly, confidently and with a dedication to an intended outcome.

The Evercade looks to play to its natural strengths. Blaze is a company known for its licensing efforts, and without retro-era hardware of its own, it’s free to compile games from all sorts of platforms. In its launch lineup, though, there’s a clear show of restraint. Games appearing in the initial batch include Atari 2600, Atari 7800, NES, SNES and Genesis releases. Its library extends, even at launch, beyond the studios that’d be tapped for inclusion on a big Nintendo or Sega system, with smaller companies like Piko Interactive and Mega Cat Studios mixed in with Atari and Namco. With the disparate variety of the lineup, the system combines the uniform nostalgia of dedicated cartridges with the unpredictable appeal of a secondhand games folder.

Blaze’s director told us the choice to include only home ports was an intentional one for a consistent player experience. Still, it probably helps that minimizing platforms to emulate let more effort and focus go into making sure those platforms run well. The Evercade name would seemingly suggest some arcade inclusions. At least for now, when you play games like Pac-Man and Asteroids, you play the limited home conversions of the time. There are more platforms, including arcade releases, on the way.

The Evercade’s game library seems to embrace its limits, though. It remains within these platforms’ libraries, and since the launch hardware includes no options for connecting a second controller, games were largely chosen for a varied and interesting solo experience. This is done by combining big, marketable names on its dedicated multi-game cartridges with smaller stuff most wouldn’t otherwise buy. The result is… fun! Quirky! Instead of overloading you with only 2600 games on the Atari carts, it digs deep into the late-life 7800 library to deliver the swinging hits of Ninja Golf and the proto-jamming of Basketbrawl. It sets Evercade apart from the one-note portables lining store shelves for the past decade. 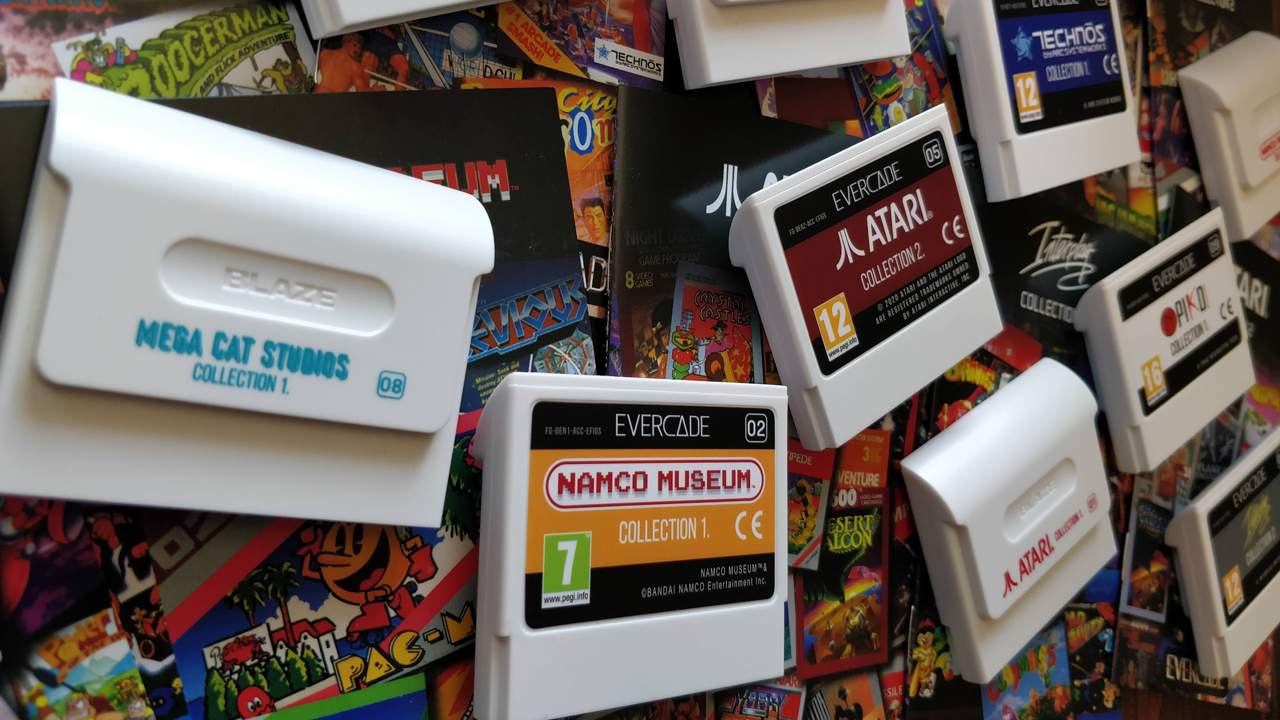 Its biggest game strengths come in the launch Mega Cat Studios and Piko Interactive collections. Both the newly-developed games of Mega Cat and the unearthed curiosities of Piko gain a new life here, as playing them on original hardware is an often-expensive task and each of these packs is stuffed with options. We talked more about these offerings in our guide to the system’s launch lineup.

As a whole, the Evercade library is flush with options in certain genres. Most common are home ports of early arcade games, colorful side-scrolling platformers and belt-action brawlers. Less represented are falling-block puzzlers and JRPGs. Effort was made to grab some special inclusions for variety. Mappy Kids, essentially the Super Mario Bros. 3 of Mappy, shows up here in an official English release for the first time. Magical Drop II is here, too, in its recently localized form. The latter does a lot to help bolster its genre, and each cartridge makes attempts like this to throw a game or two at you that you may not have played.

There are technical experts out there who are better at analyzing the details of the Evercade’s emulation performance, but our experience with it has been highly favorable. These games run like they should, which is a huge accomplishment for the price point. The included settings are mostly limited to that stretching-to-widescreen option that you should never use. There’s a focus on function over frills, and it’s likely the best call for a system with the Evercade’s resources. In our testing, it delivers on its promised four to five hours of battery life, regularly exceeding that duration in its fresh state.

At launch, its 4-by-3 library doesn’t really use the display’s widescreen space. Blaze told us the screen was chosen for wider menus and for future opportunities to display some platforms’ titles like the upcoming Atari Lynx collections. That’s true, but there’s also probably some merit to widescreen displays (especially ones matching the size and resolution of the PSP) being an economical production option.

Evercade’s launch window includes some lingering hardware concerns. Our review unit’s cartridge slot was particularly snug, keeping games in while you’re playing, but making changing it out something of a task. Blaze told us that the design of consumer units has been adjusted to fix that, so it shouldn’t be a problem going forward. The system’s A-B-X-Y button labeling doesn’t regularly match up with in-game button prompts, but the company has committed to a “day-one” firmware update to allow players to customize inputs. 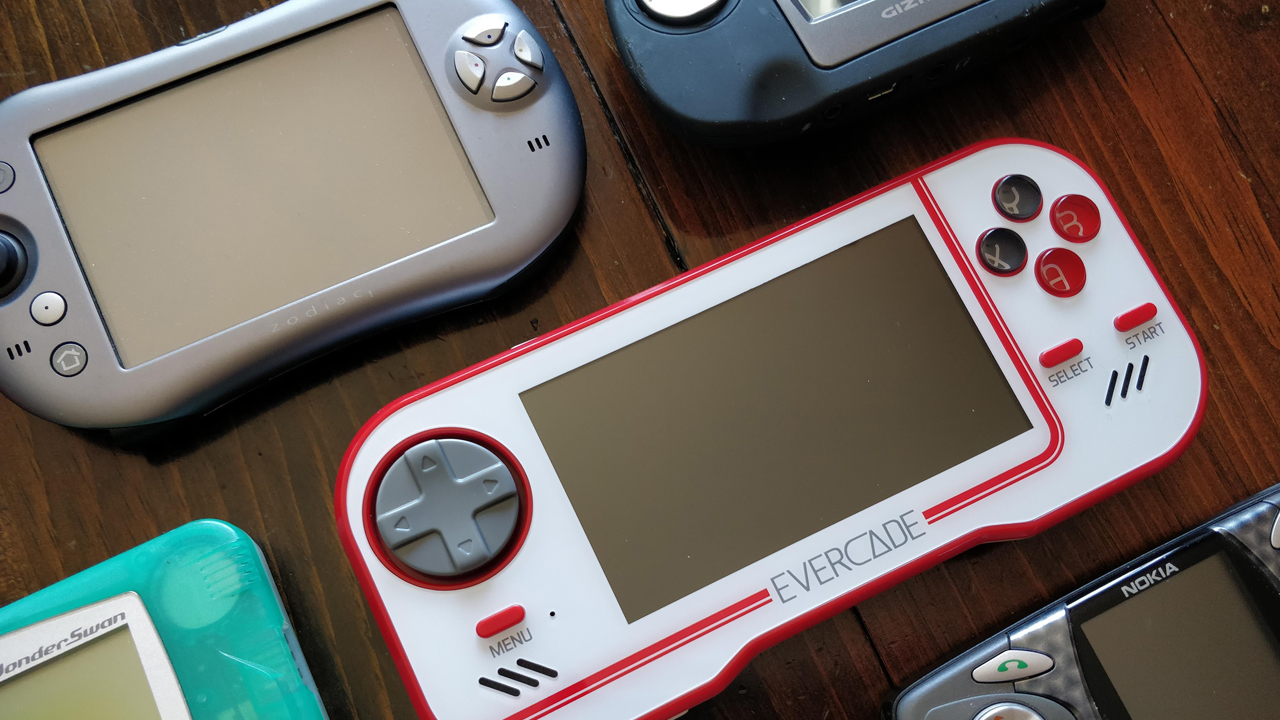 The most concerning technical aspect of Evercade is one that’s likely harder to solve. The system’s HDMI output works well. Games from this era look nice and crisp at the device’s 720p output, and emulation and sound hold up as well. The limitations come into how the platform handles switching between TV output and handheld play. Rather than a Nintendo Switch-like solution, Evercade requires (and immediately performs) a full reboot to change displays.

Combined with the device itself being the only means of controlling games, it means that an exciting in-game moment or accidental movement can jostle your cable out of place momentarily and wipe your in-game progress. As it stands, we’d recommend Evercade as a dedicated handheld that you can occasionally hook up to a TV for a bit, but not as something that is heavily used in that context.

Thankfully, Blaze seems to be prepared to support Evercade long-term. Cartridges are designed to work with future hardware iterations, and two-player functions have been retained for precisely this purpose. If there’s a tailored TV-centric device on the way that uses the same game library and supports multiplayer, that would be a huge help. It could make investing in Evercade games an even more tempting proposition.

For hardcore enthusiasts interested in customizing a high-power handheld with all sorts of files and functions, Evercade holds very little appeal. It’s simply not what it’s trying to be. Instead, it’s an out-of-the-box, fully licensed device that’s locked down and scaled to the minimum capabilities needed to do its job well. That approach leads to more partnership opportunities, and if Blaze can leverage that to bring less-obtainable games to the platform, it could be a real long-term strength.

Evercade will release, in a larger window due to global shipping conditions, from May 22 to June 5, 2020. The one-cartridge Starter Pack retails for $79.99 with an Atari compilation, while the $99.99 Premium Pack adds Interplay and Data East collections. Additional games are available individually for $19.99. Post-launch releases include two Atari Lynx Collection cartridges, as well as Xeno Crisis & Tanglewood.

For more, check out our guide to the system’s launch games and our interview with Blaze product director Andrew Byatt.