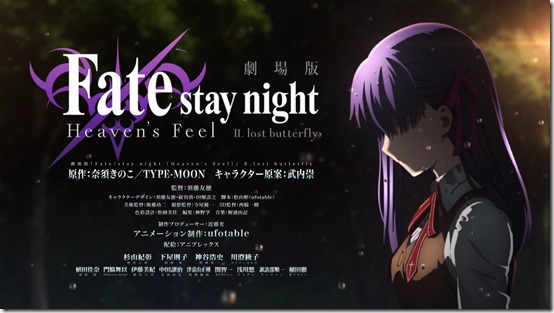 The second part of the anime film trilogy, Fate/stay night: Heaven’s Feel, premieres next month in Japan, and Aniplex shared a new trailer that gives us a glimpse at what’s to come.

“The opponent I must fight still remains in this town.”

The boy made a decision to keep fighting, and to protect the girl.
The Holy Grail War, where Masters and Servants fight to claim the Holy Grail.
A new war has started again in Fuyuki City, 10 years after the previous Grail War.
However, due to the participation of Zouken Matou,
the patriarch of one of the Founding Three Families in the Holy Grail War, things begin distorting, twisting, and growing worse.
Zouken summons the Servant, True Assassin.
An unknown shadow covers the city, killing Masters and Servants one by one.
Shirou Emiya, who has been fighting as a Master in the war, gets injured, losing his Servant, Saber.
With his firm decision to protect Sakura Matou, Shirou refuses to leave the battle.
While Sakura worries about Shirou, she also gets entangled in her own fate as a mage.

He decided he wouldn’t betray her.
However, their fervent wishes are about be crushed by the black shadow soon…

Here’s an earlier trailer with English subs from Aniplex:

This is the story of an omnipotent container able to grant the wish of anyone who claims it—the Holy Grail.

The third route of the visual novel game, Fate/stay night [Heaven’s Feel] (also known as the Sakura Route) is the saga following Fate (a.k.a. the Saber Route), depicting the wish of Saber, the Servant summoned by Shirou, and [Unlimited Blade Works] (also known as the Rin Route), which depicts the path taken by the hero, Shirou Emiya, through the battles fought alongisde the magus Rin Tohsaka.

Heaven’s Feel is produced by ufotable, the company behind the 2014 TV anime adaptation, Unlimited Blade Works, and directed by Tomonori Sudo, who also illustrated the new key visual for II.lost butterfly.

Fate/stay night: Heaven’s Feel II. lost butterfly is scheduled to premiere on January 12, 2019 in Japan. It is expected to make its way to theaters in the United States in 2019. The previous film, Fate/stay night: Heaven’s Feel I. presage flower, premiered in Japan in October 2017 and in the United States in November/December 2017 followed by the English-dubbed version in June 2018.