There’s a new cosmetic item in Final Fantasy XIV, and it will let players dress up as a certain NPC in-game. The official FFXIV store is now selling Oracle’s Attire, an outfit inspired by the Oracle of Light Ryne. It costs $12.

The Oracle’s Attire FFXIV outfit consists of three parts. You get the Oracle Top, which looks like the Oracle of Light dress Ryne wears. You also get Oracle Pantalettes to wear under it. These are a pair of matching white shorts. Finally, you get Oracle Leggings that are replicas of her boots. The outfit is for a single character and can only be worn by female avatars.

Here’s a closer look at the FFXIV Oracle’s Attire inspired by Ryne. 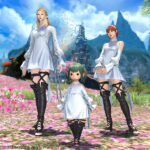 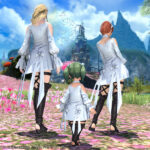 This is the second sort of outfit with this kind of motif. Earlier, Square Enix released Minfilia’s Modish Attire. This is another primarily white outfit. It’s also $12, but only includes the Gown of Light top and Skirt of Light bottom.

In addition, this is one of many new outfits to appear in the game. Back in June 2021, Square Enix added the Ido-period-inspired Resshi Attire.

Final Fantasy XIV is available for the PlayStation 4, PlayStation 5, and PC. The Endwalker expansion will launch on November 23, 2021.