As usual, the ESRB description for Final Fantasy Crystal Chronicles: The Crystal Bearers spoils some surprises like a machine gun fight with a dragon. Alcohol references and a certain mini-game contributed to The Crystal Bearers’ teen rating.

Here’s a snippet from the ESRB. Note the bolded part.

Some female characters wear revealing fantasy outfits and bikinis that expose deep cleavage. During one sequence at the beach, a woman accuses a man of peeping on her in an outhouse changing room (e.g., "How icky of you to watch girls changing!" and "You were peeping?!"). In one mini-game, two women in bikinis try to knock each other off a floating platform using only their hips. Players will also encounter multiple alcohol references during their adventure: wine casks, barrels, and bottles (e.g., "Rainbow Wine") can be found in some locations; a goblin samurai holding a sake-shaped bottle appears to be drunk; and players can visit a winery and uncork kegs and barrels, allowing the wine to pour onto the floor. If players wish to, they may pick up steaming manure and toss it at enemies or the bucolic surroundings. 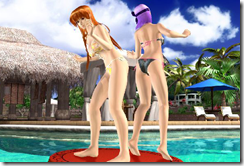 Sounds like the butt battle mini-game from Dead or Alive Xtreme 2 with Clavats and Selkies. Never thought I’d see that in a Crystal Chronicles game, but then again I never imagined using telekinesis to toss feces either.