Note: These impression are based on a newcomer’s point of view. I have no prior experience with the original Final Fantasy XIV. Furthermore, the impressions are written based on the PC version, which means there may be some differences with the console version of the game. 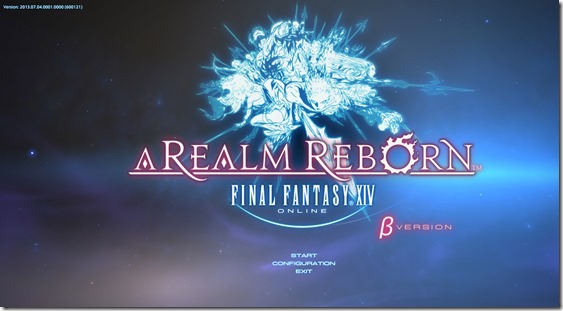 When the original Final Fantasy XIV was released on the PC a couple of years ago, it attracted a fair share of criticism directed at gameplay issues to the overall quality of the game, which seemed lacking in certain areas. Apologies were offered, promises were made, and Final Fantasy XIV underwent a reboot to give birth to a game which promised to provide an experience synonymous with the Final Fantasy brand. Hence, Final Fantasy XIV: A Realm Reborn was born from the ashes of its predecessor to signify a rebirth of the series.

So, is Square Enix in possession of a Phoenix Down? Let’s find out.

Immediately after filling out my login details and server selection, I was taken to Final Fantasy XIV: A Realm Reborn’s character creation menu, which offered me a choice of five races to play as, each with their individual characteristics. Hyur are the equivalent of humans in FFXIV’s world; Elezen are the elf counterparts; Lalafell are petite folk; while Roegadyn represent the imposing and muscular individuals. My personal favourite, though, are the Mi’qote, which are defined by their cat-like features and are just adorable to look at. 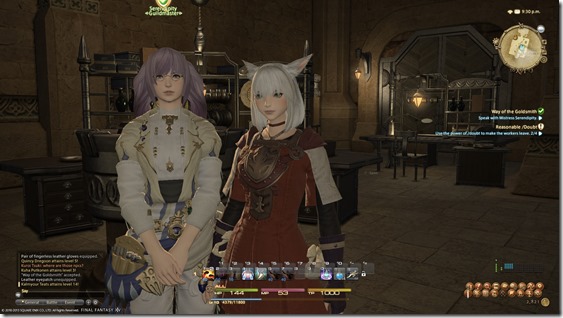 Although spoiled by all the choices I had, I eventually opted to create a female Mi’qote character. Immediately after choosing a race, a revelation struck me as the screen transitioned to the character customisation menu: Final Fantasy XIV: A Realm Reborn is a beautiful game. My character was positioned on a grassy field with a limitless sky extending over the horizon and the view was simply astounding. I simply had to take a moment to appreciate it before I proceeded with the next step of character creation.

Character customisation in Final Fantasy XIV: A Realm Reborn is somewhere in between robust and basic. It doesn’t allow you to customise every aspect of your character like in most western RPGs, but at the same time it provides you with enough different customisation options to feel like the character is yours. An aspect that I find amusing while creating my Mi’qote is that I could adjust her tail’s length and even its shape, ranging from bushy to soft. Yes, you can also customise your character’s chest size, for those who are dying to know. Similarly, it is possible to customise your male character’s muscle tone for seekers of manly proportions.

After completing the character creation process, I decided that my Mi’qote would become proficient in the ways of the fist, and hence I chose the Pugilist profession, which solves the world’s problems with a fistful of justice. Classes in A Realm Reborn decide the starting city of your created character, and in the Pugilist’s case, they start out in Ul’dah, a city situated at the heart of the desert. And thus, my journey into the realm of Eorzea began. 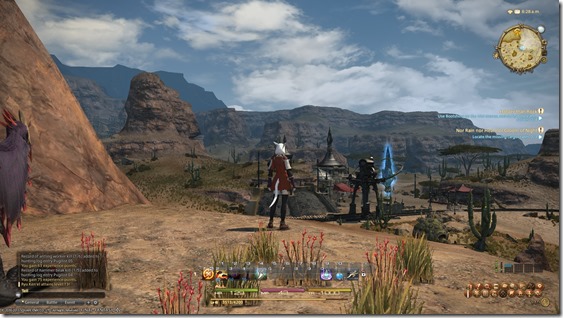 “Is this your first time in Ul’dah?” the man in the carriage asked me. I told him it was. “What brings you here? Fame? Money? Glory?” he asked. I tried to think of an actual reason to why am was sitting in this carriage, making this journey. Unfortunately, I didn’t know the answer myself, deciding to give him a blank stare before the carriage was unexpectedly stopped by government officials. Just as the carriage was being inspected, a group of monsters approached out of nowhere with severe bloodlust. We were swiftly dismissed by the officials as they dealt with the monsters, the carriage accelerating at full speed to arrive at our destination. In the distance, I could see a majestic city in the middle of the desert waiting for me.

At this point the game begins proper, via tutorials which introduced me to the basics such as movement, the world, character progression, guilds and sidequests. The earliest quest involved making my way through the city of Ul’dah for errands and, at the same time, introducing the mechanics of fast travel in Final Fantasy XIV: A Realm Reborn, which are quite similar to the ones in Guild Wars 2. Aetherytes are one of the key components in A Realm Reborn and these massive crystals are the primary fast travel method between different regions. 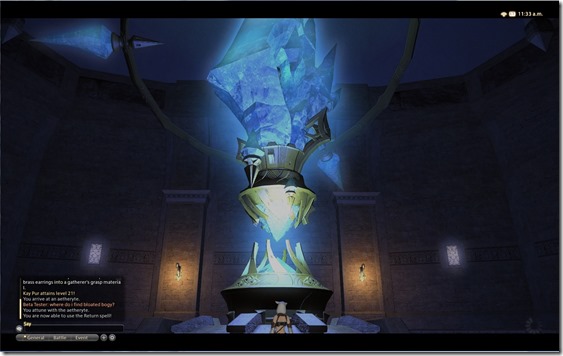 By attuning my character with Aetherytes, I was able to teleport to the Aetheryte’s destination via a “Teleport” skill which costs Gil. In case a particular Aetheryte was set as my home point, I was then able to return to it Aetheryte for free via the “Return” skill, but this skill needs to recharge for 15 minutes per use, hence it is not abusable. In addition to Aetherytes, there are also Aetheryte shards, which are scattered across the city for travelling within its boundaries. My only quibble regarding the intra-city travelling was the aetheryte shards are not well defined on the map. When accessing the fast travel menu, only location names are given without any indication where the shards are, and I had to rely on memory to match the location name to the respective shards’ actual position. Hopefully this issue is resolved before the final build of the game.

Final Fantasy XIV: A Realm Reborn is at heart a Final Fantasy game, and even the simplest fetch quests will have a background story backing them up, which can break the tedium of killing monsters and getting their drops just for the sake of gaining extra experience points and Gil. A variation of sidequests include having to use emotes to interact with NPCs, which can be fairly amusing depending on the circumstances. Small details like these made me feel like the world was truly alive and I was on my own personal adventure within it.

Having seen enough of the city and learned everything by heart, I proceeded with venturing out of the city walls to experience the other aspect the game had to offer—the combat. Equipped with my beginner-level gear, I proceeded to unleash my fists of fury on small critters such as ladybugs and hornets. As I heard the trademark Final Fantasy level up tune, I knew deep inside my heart that their sacrifices would not be in vain, as I moved along to dispatch stronger enemies with faster punches and better gear. Combat is fast and fluid in A Realm Reborn and it does offer a challenge after level 10 as the enemies hit harder, move faster and attack in groups, which can be quite difficult to manage unless in a party. 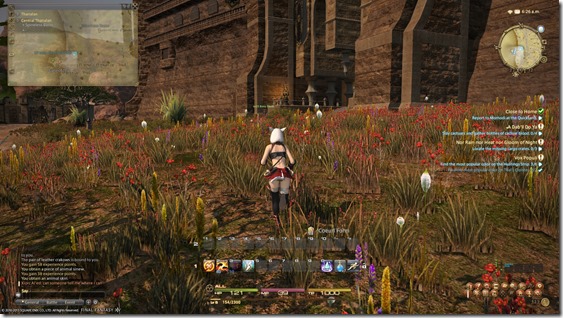 Combat is handled in real time with cooldown timer on skills in addition to MP for magic attacks and TP for physical attacks. Unlike other MMORPGs, which offer a branching skillset for characters to master, Final Fantasy XIV: A Realm Reborn utilises cross-class hybrid skills which allow you to customise your character with different skills from different professions once the required profession has levelled up sufficiently. Each profession’s progress is linear, but in the long run the character can potentially grow into a jack-of-all-trades if you make the effort to level up all the professions.

While I was admiring the landscape of region around Ul’dah, a notification popped up notifying me that a FATE event was occurring in the area I was in. Not wanting to be left behind, I sprinted towards the location to find that the event was at a significantly higher level than mine and my character was one-shotted by the monsters in the area. Full Active Time Events (FATE) are timed events which appear at regular intervals in certain areas of the map. These events range from terminating enemies to collecting items and are great to participate in when there’s nothing to do or just to gain experience, which scales depending on a character’s contribution in battle.  Since my character died without contributing anything, she lay there motionless as I shed a single tear. 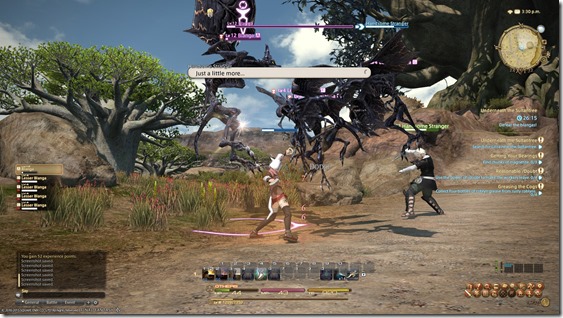 As I progressed higher in the Pugilist Guild, several new options opened up for my character, including a hunting log, which rewards experience points by exterminating a number of monsters and most importantly, the ability to change professions. There are quite a number of professions offered by A Realm Reborn and it is even possible to choose a profession which does not require combat such as goldsmithing and weaving.

The beauty of multiple professions in Final Fantasy XIV is it requires you to only change your weapon to change your class. Simple, yet effective. Even so, the act of changing equipment is unnecessarily lengthy as I had to open up the character menu every time I need a profession change. A keybind would be nice for something like this. As for the non-combat professions, they are quite fun by themselves and offer an alternative to those who prefer a different playstyle. 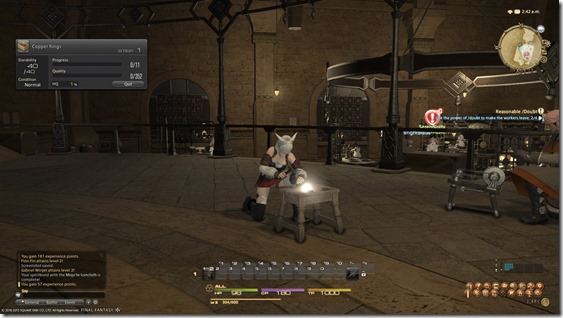 Final Fantasy XIV: A Realm Reborn did provide me with a pleasant experience, but there are still a few rough edges that need to be ironed out before the game’s full release. I found that the user interface still needs a bit of streamlining to be more accessible. The game’s UI is customisable and that’s a move in a right direction, but the main commands such as teleport and return could probably be integrated into the map to reduce the amount of commands on the bottom right section of the screen. Another issue is the Aetheryte Shard teleportation map to ease navigation.

These minor issues aside, it seems to be a solid MMORPG. I would have loved to explore Eorzea more as the time I had with A Realm Reborn was quite short, but over the time I spent with it, I was quite impressed with the effort put behind the game. The music is exceptional, the world is stunning, the towns feel alive and I can ride chocobos. (Although I wish it were with Crazy Chocobo playing in the background, preferably while wearing an eyepatch.) 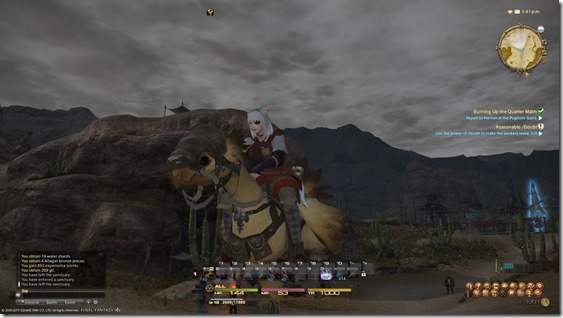 1. Try to keybind the lock-on function as soon as possible to save the trouble of targeting strong monsters.

2. Story quests are instanced and you may be joined by AIs to assist in the battle.

3. The beta version of Final Fantasy XIV: A Realm Reborn is unvoiced, but in the full version, cutscenes and story quests will have voice acting.

4. Screenshots, surprisingly, cannot be taken during cutscenes and NPC interactions. In that case, Print Screen is your friend.