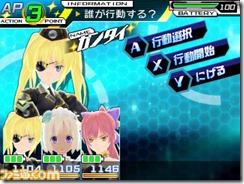 Years of Amazones takes place on a all-girls prison planet where you are one of the prisoners. The goal of the game is to reach a spaceship and escape. Fortunately, you have some friends like Gantai, the girl with the eyepatch (her name literally means "eyepatch"), who doesn’t laugh much since she has a stern military-like personality. Gantai attacks with a handgun and an army knife.

Famitsu also revealed Kunoichi who has kunai, a wakizashi, and shuriken. She usually has a cool personality, but can quickly become shy. Years of Amazones uses a turn based battle system with two energy parameters to pay attention to AP (action points) and a battery meter. Each time you use an attack you have to spend some AP. Battery power is consumed when you use strong attacks like skills.

Players will have to fight other girls on the prison planet in dungeons. The story unfolds as you progress through dungeons and reach specific points that trigger event scenes.

Years of Amazones has character designs from High School DxD artist Miyama-Zero and Shigetaka Kimura who created concept art for a number of Arc System Works games including gallery illustrations for Guilty Gear XX Accent Core Plus. The game is slated for release on Nintendo 3DS on November 14.