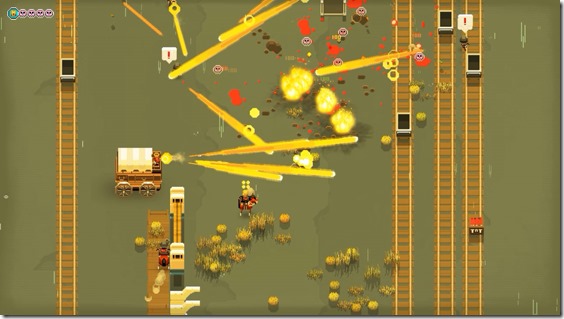 Devolver Digital has announced that it will be publishing indie developer Farmergnome’s hectic western-themed top-down arcade shooter A Fistful of Gun on Steam for PC in Spring 2015.

Selecting from 11 unique gunslingers, you march across dusty plains, ride a horse across grimy mining operations, and send bullets flying across other typical western settings as you seek revenge against bandits, bears, psychopaths, braves, and boogeymen. A Fistful of Gun is chaotic at all times, with the screen filling with enemies that will shoot you as fast as they see you. Survival demands twitchy reactions and deadly accuracy. To help you out, you can collect gold from fallen foes to upgrade your character, or you can swig some “liquid courage” to unleash a barrage of bullets that lives up to the game’s title.

The design of the gunslingers you can play as goes beyond having different looks and weapons as they’re also each tied to a specific control scheme. A machine gunner will require that you control them with a gamepad, while a rifleman can only be used with a mouse. There are plenty of other variants, too, especially when the keyboard gets involved. 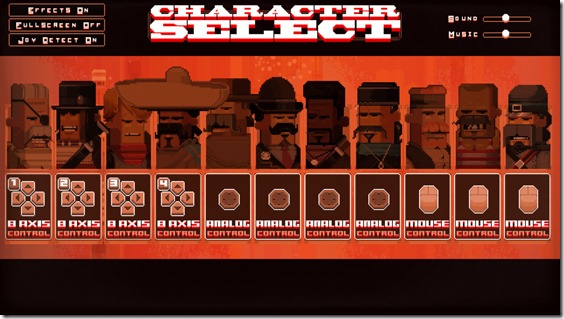 Where A Fistful of Gun really excels is in its multiplayer options. Aside from solo play, you’ll be able to play with up to seven other players through local and online co-op multiplayer.

This is where all of those different control schemes come into their own as you can play with any number and combination of mouse, keyboard set-ups, and gamepads. If you’ve had enough of each other, then you can also square up against one another in the game’s versus mode.

A Fistful of Gun started out life as a smaller freeware project that can still be download on Game Jolt for Windows. It only has three playable characters and lacks a lot of the commercial version’s features, but it will give you a good idea of what to expect next Spring.