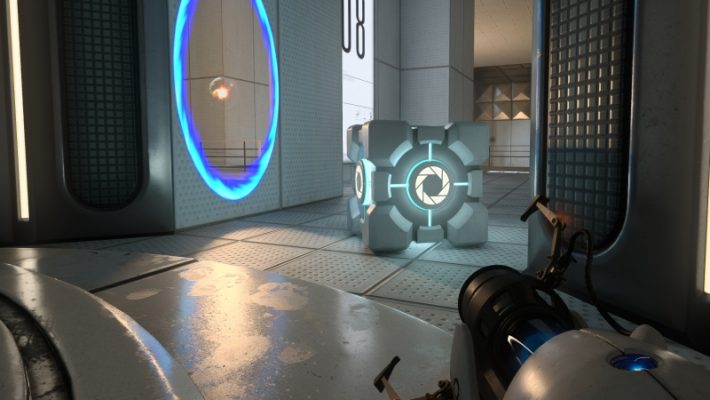 Hardware and GPU maker Nvidia has announced a new DLC pack for 2007’s Portal. Called Portal with RTX, the content pack will be free to all players and launch in November 2022.

Check out the Portal with RTX world premiere trailer.

The goal of Portal with RTX is to portray a tech demo of sorts, both for Nvidia’s ray tracing technology and for Nvidia RTX Remix, a new modding platform that will allow modders and amateur developers to add ray tracing to existing games. Nvidia claims that modders will “have the tools to make ambitious remasters, even for games that were previously unmoddable.”

Players will be able to “import” a game to RTX Remix, enhance materials, create custom assets, then export an RTX mod equipped with ray tracing and support for other Nvidia-based features like DLSS (Deep Learning Super Sampling) and Nvidia Reflex (a free feature designed to lower input lag). Players can also check out comparison screenshots from the base game and Portal with RTX at this site, along with more detailed explanations of the technologies applied.

Portal with RTX was just one of the various Nvidia-related announcements, led by the introduction of the company’s latest series of graphics cards. Nvidia claims that its GeForce RTX 40 series are up to 4X faster than the current 30 series. Alongside the RTX 40 series are updates to Nvidia’s DLSS feature, which will be supported by 35 new games, including Cyberpunk 2077, Marvel’s Spider-Man Remastered, and Hitman 3.

Portal with RTX launches in November on PC. The base Portal game is available on PC, and also appeared on the PS3, Xbox 360, Android, Linux, and Nintendo Switch.