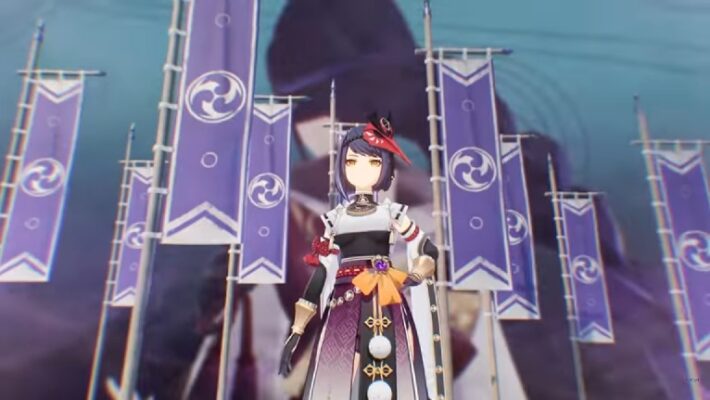 With Version 2.1 of Genshin Impact on the horizon, miHoYo has introduced us to yet another new character that players can summon on the upcoming banner: Kujou Sara. Sara is a general of the Tenryou Commission. She works alongside Raiden Shogun to maintain the peace and eternity of Inazuma. She will appear as an Electro 4-star bow user on Raiden Shogun’s banner. Like Raiden Shogun, Sara is a support character.

You can watch Sara’s character demo video below.

Her Elemental Skill, Tengu Stormcall, allows her to rapidly gain distance from the enemy. It also gives her the Crowfeather Cover buff for 18 seconds. In this state, a fully-charged Aimed Shot will eat up a Crowfeather Cover and apply it to an enemy. Enemies with a Crowfeather will receive Electro damage after a short time. Additionally, active characters within the area of effect will gain an attack bonus that scales off of Sara’s base attack stat.

Her Elemental Burst, Subjugation: Koukou Sendou, deals Electro damage in an area and then spreads out in a cross-shape to deal four more strikes of Electro damage. This makes it a great Burst for crowd control and large hordes of enemies. Similar to Tengu Stormcall, this Elemental Burst can boost a character’s attack by Sara’s Base attack so long as they are within the area of effect.

Kujou Sara will appear as a 4-star character in Version 2.1 of Genshin Impact, which will go live on September 1, 2021. Genshin Impact is readily available on mobile devices, Windows PC, PlayStation 4, and PlayStation 5.