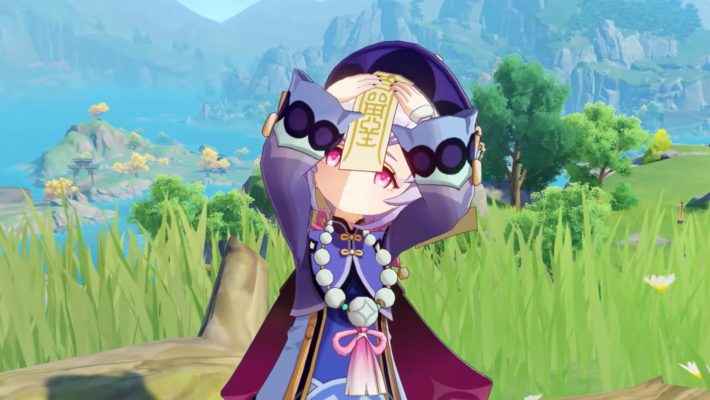 Time for more Genshin Impact! Though this time, what we’re about to see is really more of a refresher. That’s because the latest trailer looks at someone people might have already pulled from the gacha. The Genshin Impact Qiqi: Fortune-Preserving Talisman trailer is here.

First, in case you haven’t met her yet, Qiqi is a Cryo sword-wielder, though you’d be forgiven if you would think a small child like her who also happens to be a zombie would instead be a mage. She’s a five-star unit available through gacha pulls known for working at Bubub Pharmacy, having the worst possible memory, and needing to give herself an order before she does anything because zombies can only do what they’re told.

After the introduction, the new Genshin Impact Qiqi trailer acts like ones we recently saw for Jean and Klee. It essentially shows exactly what Qiqi can do in battle. Her Expedition Talent is Former Life Memories. You can also see Liyue plants on the minimap with her around. Her notable attacks mentioned and shown are the Ancient Sword Art normal attack, Adeptus Art: Herald of Frost elemental skill, and Adeptus Art: Preserver of Fortune elemental burst.

As for adding Qiqi to your party, she might be a bit difficult to collect since she is a five-star unit. However, she is one of the five-stars available in the Wanderlust Invocation banner that is always available, so at least she isn’t only available for limited time periods like Klee or Venti.

Genshin Impact is available for the PlayStation 4, PC, and both Android and Apple iOS devices. It is also eventually coming to the Nintendo Switch.