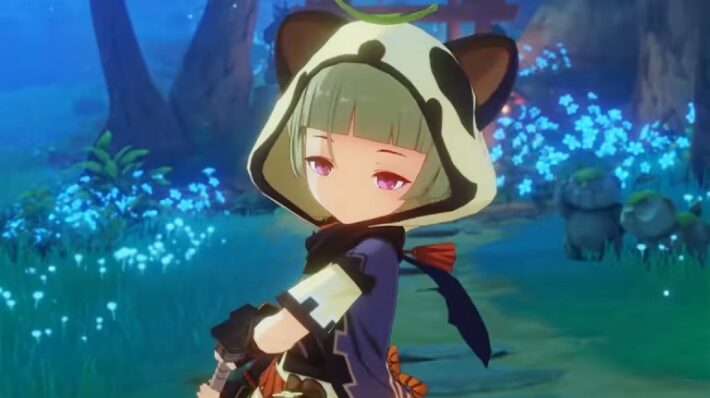 Despite her small size, Sayu from Genshin Impact can blow you away with both her Anemo skills and her claymore. In the company’s new character demo trailer, miHoYo shows us exactly how she can do so. It also posted more information on Sayu’s personality, the details of her abilities, and her voice actresses on the official Twitter and on Hoyolab.

Sayu is a lazy girl and it comes across in her voice acting, even when she is in the middle of combat. Though the character trailer has a very upbeat song in the background, Sayu still sounds like she is ten seconds away from just falling asleep. Her Japanese voice actress is Aya Suzaki, who previously voiced Mako from Kill la Kill and Elphelt from Guilty Gear. Her English voice actress is Lily Ki, or “LilyPichu,” who is a musician and voice actress, with roles such as Rin from Phantom Breaker: Omnia.

You can view the Genshin Impact Sayu character trailer here:

Sayu’s skill set gears her more towards support and healing. When you long-press her Elemental Skill, she goes barreling forward at high speed, and anyone she runs over gets hit with Anemo damage. She can also absorb elements that she runs into, and deal extra damage of that elemental type. When she stops, she deals Anemo damage in the nearby area. Of course, the longer you use her Windwheel state, the longer her cooldown. For those who would rather her stay in one spot, you can make her perform a whirlwind kick by short-tapping the Skill button.

Sayu’s Elemental Burst summons a daruma that will deal Anemo damage to nearby enemies while healing party members. The daruma has two effects which will activate each tick depending on the situation around it. If characters around it have over 70 percent health, it will deal Anemo damage. If a character around it has 70% or less HP, it will heal from the active character with the lowest. This does mean that, unlike Bennett or Diona who can heal multiple characters at the same time, Sayu can only heal one person each tick.

Genshin Impact is readily available on PlayStation 4, PlayStation 5, Windows PC, and mobile devices. A Nintendo Switch version is in development. Sayu will be available on the Yoimiya banner, which will launch in-game on August 10, 2021.