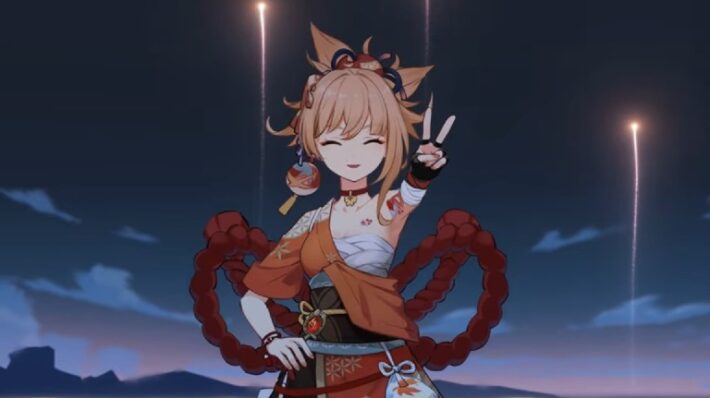 As we enter August, summer is at its peak, and there’s nothing better than fireworks, as Yoimiya from Genshin Impact will prove to us soon. miHoYo has released a character trailer and more information on the 5-star Pyro archer from Hanamizaka. You can start pulling for Yoimiya in Genshin Impact from August 10, 2021, which is right after the current Ayaka banner.

Yoimiya’s Japanese voice actress is Kana Ueda. Ueda previously voiced Rin (and Rin incarnations) from the Fate series and Rachel Alucard from BlazBlue. Her English voice actress is Jenny Yokobori, who has voice credits as Kumiko from The Simpsons and Kaneishi in SSSS.Dynazenon.

Similar to Ganyu, Yoimiya has two levels on her charged shot. At charge level 2, she can shoot out three homing Kindling Arrows for extra Pyro DMG against an enemy. If you activate her skill Niwabi Enshou, she will lose the ability to create Kindling Arrows. However, her normal attacks will convert to Pyro DMG. Lastly, her Elemental Burst, Ryuukin Saxifrage, will deal Pyro DMG in a large area, as well as mark one enemy with Aurous Blaze. If any other character then hits an enemy marked with Aurous Blaze, it will deal AoE Pyro DMG. Defeating the enemy before the effect ends will pass it on to another enemy nearby.

Genshin Impact is available on mobile devices, Windows PC, PlayStation 4, and PlayStation 5. Yoimiya will appear in the gacha from August 10, 2021.