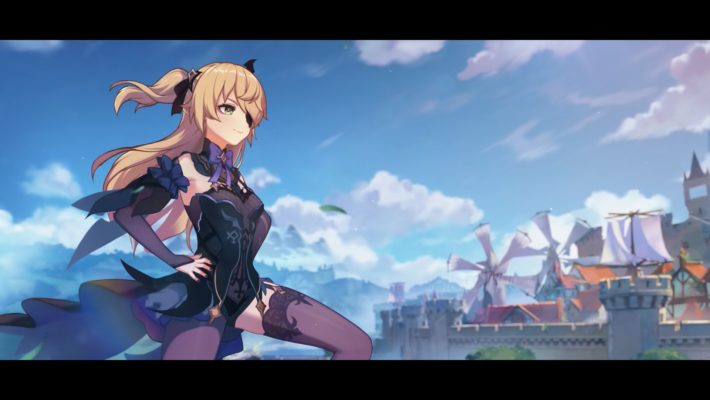 Now that the Genshin Impact Unreconciled Stars event has begun, miHoYo’s offered details on how every step of the event will work. People who reached Adventure Rank 20 can participate, some characters will experience bonuses, and certain portions of the event will require Resin to receive certain rewards. Eventually, the Prinzessin’s Pact part of the event will give people the four-star electro archer, Fischl. It will run until November 30, 2020, with portions appearing in phases, and its event shop will close on December 6, 2020.

The initial part of the quest is Unknown Star, which begins November 16, 2020. This is the part of this questline that doesn’t involve Resin. Instead, it means taking the Unknown Star quest, completing it, and looking around an area near Mondstadt for Meteorite Shards. Collecting them for salvage quests and give you Fading Star’s Might for the in-game shop connected to the event.

The second part of the event is Star of Deceitful Dreams and begins November 18, 2020. This kicks off with The Crisis Deepens questline and takes part in Liyue by the river near Wangshu Inn, Cuijue Slope, and Luhua Pool. This is also the first part of the event to involve Resin, as you’ll fight enemies and have chances to use 20 Original Resin to get Meteorite Remains and Fading Star’s Might. You’ll be able to fight enemies at Meteorite Remains to salvage, with images in miHoYo’s announcement making it seem like you might have about seven minutes to fight foes.

Finally, completing What the Skies Conceal, the Water Reveals quest begins Star of Destiny on November 23, 2020. This opens up the Fallen Star challenge, which can be completed alone or with other people and can involve spending 40 Original Resin to get Fading Star’s Essence for the shop and rewards. This is another quest where you need to defeat enemies, then submit energy you’ve collected within a certain amount of time.

Also, as a note, miHoYo mentioned certain people will be more effective. It noted that the Meteorite Remains and Fallen Star segments that start after November 18, 2020 will offer a 60% boost for Beidou, Chongyun, Fischl, Lisa, Ningguang, Mona, Noelle, Tartaglia (Childe), and Xiangling. Since Noelle is on the beginner’s banner and Xiangling is a character people can earn for free, you might already have one of these characters in your roster.

As for the free Fischl, you basically have to do everything to complete “Prinzessin’s Pact.” As long as you get through the three other portions, Unknown Star, Star of Deceitful Dreams, and What the Skies Conceal, you will add the four-star to your roster.

Genshin Impact is available for the PlayStation 4, PC, and both Android and Apple iOS devices. A Nintendo Switch version is in development. The Genshin Impact Unreconciled Stars event will run until November 30, 2020, with the in-game shop connected to it open until December 6, 2020.